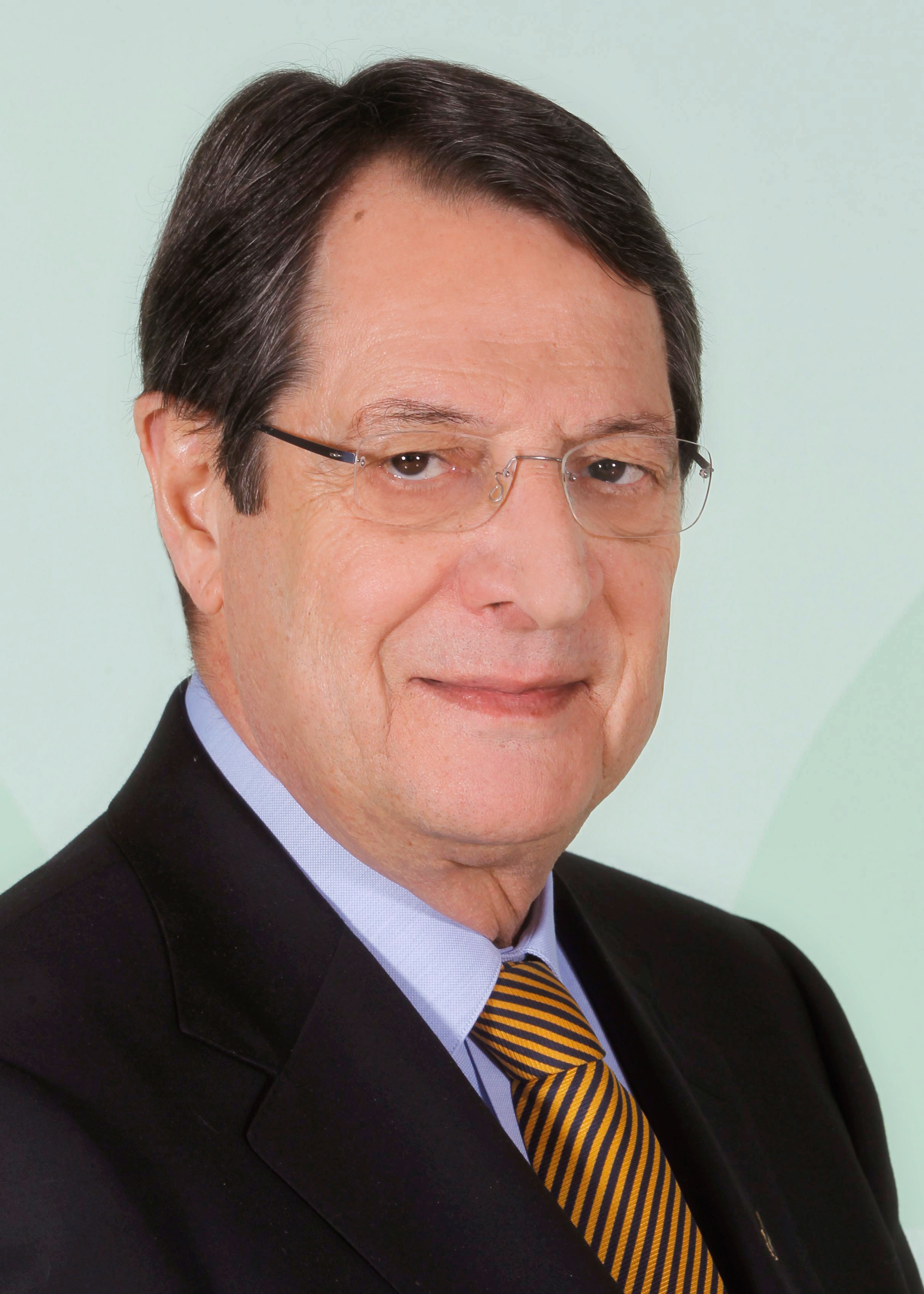 Nicos Anastasiades , President of the Republic of Cyprus

The strong performance of key sectors has contributed to a GDP growth rate close to 4% and with positive projections for the near future, Cyprus maintains its title as one of the fastest growing economies in the EU. The island’s quick economic turnaround has renewed investor interest and moves to strengthen both European and regional relationships in business and the energy sector, has positioned Cyprus to play a key role in the eastern Mediterranean, says President Anastasiades.

Cyprus has established itself as an attractive European business and investment destination. What do you see as the country’s key strengths and assets?

Over the past few years, and through an ambitious reform programme, we have succeeded in turning an economy in deep distress into strong recovery – it is a story of returning to growth against all odds and gaining international praise for our efforts. This was the result of the hard work and sacrifices of the Cypriot people, and the determined, focused efforts of the government.

I am pleased to say that our efforts and bold decisions have delivered concrete results. Cyprus is currently one of the fastest growing economies of the EU, with a GDP growth rate close to 4% and with very positive estimations for the coming years. All the key sectors of the economy are now contributing to growth, with our financial and business services sector maintaining significant comparative advantages. Successive upgrades of the Cyprus economy by rating agencies confirm, in the best possible way, that we are on the right path towards full re-establishment of confidence towards Cyprus in the international investor community.

Our goal to regain the trust of foreign investors was achieved because Cyprus currently offers an ideal combination of stability, opportunity and excellent prospects. As a result of the government’s targeted policies and measures, foreign direct Investment in 2016 recorded a 9.1% rise compared to the previous year, which was the second largest increase at EU level.

The combination of the above, in conjunction with the reform of the public sector and the enhancement of the tax and legal framework, resulted in renewed investor interest and substantial investments in a wide range of sectors. From the operation of oil and gas giants in Cyprus’ EEZ, to the licensing of the first integrated casino resort for an investment of more than €0.5 billion, the impressive 18% annual increase in investment funds’ registration, the record numbers of the tourism industry in both arrivals and revenue, and the commercialisation of Limassol port, it is evident that our efforts have borne fruit.

How are you ensuring that economic growth continues and what incentives have been introduced to attract more business and investment?

Despite the progress achieved and strong growth, we will continue our efforts to create a stable, secure and favourable economic environment for investment and businesses. In this regard, apart from maintaining an attractive and competitive tax regime, we have put forward tax and urban planning incentives that led to significant investments from both Cyprus and abroad. To mention a few, the elimination of the property tax, the reduction of property transfer fees by half, and new tax incentives for investing in innovative companies and start-ups. This is why we have moved on to the new investment law, the creation of a real One-Stop-Shop for big investments, setting up a single licensing authority as the only investor-state contact point, in order to simplify the procedures for the faster issuing of permits and licensing of investment projects and operation of businesses. At the same time, we are implementing the citizenship by investment scheme – the Cyprus Investment Programme – for third country nationals who invest in Cyprus on the basis of specific strict economic criteria.

Cyprus has excellent international relations with its neighbours and the rest of Europe. What are the country’s key target markets, and what new relationships is Cyprus forging?

Cyprus maintains very good diplomatic relations with a considerable number of countries. One of the main objectives of our foreign policy is the upgrading of our relations with all neighbouring states and the establishment of institutionalised and regular meetings at all levels with a view to promoting joint actions. These regional dialogues can also have a substantial input in the strengthening of the relationship between Europe and the countries of the Middle East, a process in which Cyprus plays a key role.

In fact, in line with our strategy to promote greater cooperation with countries in the region, together with Greece, we have successfully established trilateral cooperation mechanisms with Egypt, Israel and Jordan, and similar cooperation with other countries such as Lebanon and Palestine are under preparation. These trilateral partnerships aim to significantly improve the coordination of our countries in an array of fields, mainly energy, security, counterterrorism, environment, tourism and many others.

However, these mechanisms are neither exclusionary, nor exclusive, and are not directed against any third country. On the contrary, they are important instruments geared towards promoting collaboration. This is our philosophy in regard to the establishment of new diplomatic relations, or strengthening existing ones, with any other country that shares our vision and goal for promoting peace, stability and prosperity.

I am also glad that recently Japan has opened an Embassy in Cyprus and we intend to open a Cypriot Embassy in Tokyo too. We also plan to open an Embassy in Morocco and reopen our Embassy in Nairobi, as we have already done in Prague as well – both of which were forced to close during the economic crisis. Furthermore, as a result of the focus being given to enhancing our relations with the Gulf region, Saudi Arabia announced the opening of a resident Embassy in Cyprus, fulfilling a decades-long goal. Consequently, all Gulf countries will have representation in Nicosia.

You won the 2018 presidential elections and a second term in office. What key targets have you set for your government to achieve and what will define your second term?

As mentioned, an important priority is the implementation of our strategy for greater cooperation with countries in our region. In this regard we aim to further enhance the trilateral cooperation mechanisms we have established together with Greece, and with neighbours such as Israel, Egypt, Jordan and Palestine, without, at the same time, excluding any country which shares our vision.

As far as internal governance is concerned, our commitment to promote reforms across all sectors remains strong. Maintaining this momentum is imperative. The entire planning for the years 2018-2023 is a continuation of everything we achieved during my first term in office, based on the national strategies implemented regarding the modernisation of the civil service, e-governance, research and innovation, investing in the youth, tourism, agriculture and many more.

We also aim to continue with the policy of tax reductions and incentives development in order to further boost entrepreneurship and attract new investments through the promotion of new initiatives and measures, with emphasis placed on innovation and start-ups. With this in mind, we will continue consultations with the parliamentary parties with a view to getting their support for our reform programme, which includes, amongst others, structural reforms in public service, the judiciary system, education, tourism sector, and the introduction of e-government.

However, my top priority during this second term in office, is no other than addressing the unacceptable current state of affairs with the continuing Turkish occupation of 37% of the territory of the Republic of Cyprus. There is no doubt that lasting peace and stability can only be achieved through the final settlement of the Cyprus Problem. My vision is that the Cypriot people, Greek and Turkish Cypriots, one day will be able to share the benefits of a prosperous country without foreign armies and guarantees, a homeland which we are all proud of and where all legitimate citizens would freely plan for the future. My vision is that Cyprus will be a free and modern state, fully compatible with our people’s expectations.

Do you foresee a solution to the Cyprus Problem in your second term in office and what benefits would a resolution bring to the country and its economy?

With a renewed mandate from the people of Cyprus, I remain steadfastly committed to pursuing my vision for Cyprus and its people: ending the division and occupation of the last 43 years, through a comprehensive settlement that is viable and functional. I am committed to continuing the negotiations, under UN auspices, in order to reunify Cyprus, ensuring conditions of safety for the future generations of Greek Cypriots and Turkish Cypriots, without any guarantees, intervention rights or the presence of permanent foreign troops.

Regrettably, last year’s Conference on Cyprus in Crans-Montana did not yield the long-expected positive results, due to Turkey’s insistence on its longstanding position to retain the right to unilaterally intervene in Cyprus through the continuation of the anachronistic system of guarantees and the permanent presence of Turkish troops.

As I have stated many times to the UN Secretary-General and the international community, I maintain my commitment to immediately engage in a new dialogue and resume negotiations as long as Turkey’s illegal actions and any unacceptable positions and demands put forward by the Turkish Cypriot side cease.

I remain strongly committed to negotiate a solution within the six-point framework that the Secretary-General has set as a basis for discussions, the relevant UN resolutions and the EU values and principles.

I do hope that it would be possible, following the Turkish elections, for a special envoy of the Secretary-General to explore through consultations with all interested stakeholders and relevant parties, if the necessary conditions that will allow the resumption of the dialogue are in place, in order to reach a viable and functional settlement.

A settlement that will fully safeguard the sovereignty, independence and territorial integrity of Cyprus and at the same time address the genuine desire of our people, especially of the younger generations, to live together and peacefully co-exist, collaborate and prosper in a European country which fully respects their fundamental human rights and freedoms.

It is my firm belief that the solution of the Cyprus Problem, would be first and foremost to the benefit of all Cypriots, creating conditions of peace, prosperity and a flourishing society, unlocking its full potential for future generations.

Regionally, it would turn Cyprus into a model-country of stability and predictability and would amplify Cyprus’ role as a security provider in one of the most turbulent areas of the world.

At a European level, it would end the oxymoron of having one of its member states divided, while it would also positively reinforce EU-Turkey’s relations and the overall security architecture of the EU.

Last, but not least, the solution of an international problem which has been on the UN agenda over the last decades, will offer a beacon of hope that even the most intractable problems can be solved peacefully.