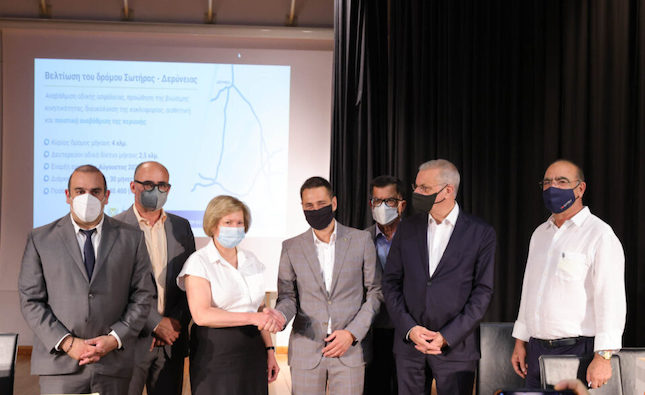 Improvement work on the Sotira-Dherynia road in the Famagusta district will begin in August following the signing on Wednesday of a €16.040 million contract between the transport ministry and the joint venture Lois Builders-Wade Adams Contracting (Cyprus) Ltd JV.

The agreement was signed by the acting head of public works department Eleni Kaskiri and Nicolaos Lois, on behalf of the joint venture.

The project is within the municipal boundaries of both Dherynia and Sotira, concerns the improvement of the basic central road artery linking the two and is of substantial significance to the wider area, an official announcement said.

A long-standing demand of communities in the area it constitutes a pledge by President Nicos Anastasiades, it added.

The project provides for improvement to the 4km road linking the two municipalities and the construction of side roads of 2.5km, expansion of the storm waters drainage system by 1.4km. Moreover, three holding lakes will be built to protect Paralimni lake which is part of the Natura 2000 network by safeguarding the quality of water that drains into it. The project includes hydraulic work and other equipment there, it added.

The road improvements are for two lanes and a third lane for right turns, a closed drainage system, the construction of pavements, a green lane, a cycle path, parking areas, pedestrian crossings, bus stops, signage and street lighting, green areas and two roundabouts.

Work will start in August, take 30 months and cost €16.040 million including VAT.

Interior Minister Nicos Nouris said projects such as these are an answer to handling the financial crisis. Despite the difficult repercussions of the pandemic and the war in Ukraine which has led to inflationary pressures, the government would not change what he termed a successful strategy to exit the economic slowdown. “We invest in development, giving the economy respite,” he said.