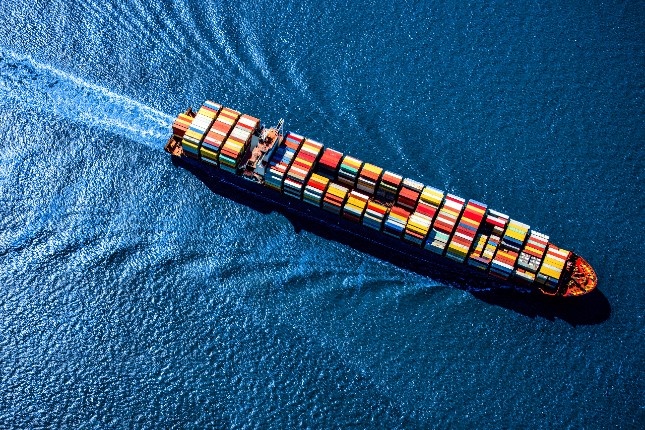 Shipping is historically one of the most successful industries in Cyprus. The vibrant and resilient sector is the longest-serving generator of foreign direct investment and is primed for further growth.

A global success story for decades, the Cyprus shipping industry has continued to stay focused and strong in the face of unprecedented challenges to global shipping due to the Coronavirus pandemic. With a maritime history spanning thousands of years, today shipping stands as one of the most significant and financially strong pillars of the Cyprus economy. The country’s maritime industry contributes more than €1 billion to the economy annually, which equates to over 7% of GDP, a far higher figure than in other countries engaged in merchant shipping. Of this figure, shipmanagement alone accounts for almost 5%.

Cyprus has the third largest merchant fleet in Europe and the 11th largest in the world, the country is also the EU’s largest third-party shipmanagement centre and amongst the top three in the world. With a sovereign flag of excellent quality, the country has become a preferred base for global shipping operations and of the more than 200 shipping-related companies present in Cyprus today some are the largest of their kind in the world. For a small island nation, the figures are impressive with more than 5% of the world’s fleet controlled from Cyprus and more than 20% of the world’s third-party shipmanagement activity is managed by companies based in Cyprus.

The country’s Shipping Deputy Ministry was established in 2018, implementing new supportive measures and flexible mechanisms to upgrade Cyprus’ status as one of the most formidable maritime centres worldwide. A good example was the reapproval of the specialised Cyprus Shipping Taxation System by the European Union, which was also unanimously approved locally by the House plenum in April 2020. This ensures the sustainability of the country’s shipping industry for the next decade – a factor crucial for the Cyprus economy. Also in 2020, Cyprus cemented its position on the Paris and Tokyo MoU ‘white lists’ in relation to the safety performance of flag administrations and joined the United States Coast Guard’s Qualship 21 list, which recognises the top performing flag states based on port state control performance.

Cyprus has proven its consistent appeal as an attractive international shipping hub with the arrival of new shipping companies and businesses offering shipping related services – underlining the local industry’s enhanced competitiveness, stability, and growth opportunities. The number of Cyprus-based companies has grown by over 30% over the last few years. A prime example of this was the arrival of a new P&I Club, Steamship Mutual Underwriting Association (Europe) Limited, which decided to underwrite all its European business through its Cypriot entity. Also, British shipping firm P&O Ferries decided to register its English Channel operating fleet under the Cyprus flag to take advantage of the benefits and security it provides.

Global shipping was one of the first sectors hit by the Covid pandemic, as most of world trade is done with China and other Asian countries. Shipping companies were faced with difficult challenges in crewing and crew changes, approaching ports and implementing measures to minimise exposure.

The Cyprus shipping industry directly employs up to 100,000 seafarers from around the world and around 9,000 personnel onshore, more than half of whom are Cypriot graduates, attracted to the sector because of its professionalism and high salaries. With such a large number of crew on vessels facing the dangers of Covid-19, Cyprus also joined a global appeal to G20 leaders to facilitate crew changes and safeguard access to healthcare for these ‘unseen heroes’ and key workers of world trade. Although the financial impact of the pandemic is unavoidable, throughout this crisis the Cyprus Shipping Deputy Ministry (SDM) has remained fully operational, providing high-quality services and 24/7 support without any disruption to ensure all ships registered under the Cyprus flag will continue to operate in the most efficient way possible.

A seafaring nation since antiquity, Cyprus began building its modern shipping industry in the early 1960s when it established its shipping registry and introduced legislation providing ship managers and owners with a competitive tax environment. Among the country’s other evident advantages are its strategic location at the crossroads of maritime transport lines between East and West, its proximity to the Suez Canal, low operating costs, a highly educated, multilingual workforce and its sophisticated professional services industry.

Cyprus is signatory to all major international maritime conventions and has bilateral cooperation agreements with 27 countries, among them leading suppliers of labour. In 2020, Cyprus’ merchant fleet had 1,735 ships with 24.6 million gross tonnage. In 2021, the gross tonnage exceeded 25 million, the highest ever since Cyprus joined the EU. The number of companies increased from 168 in 2017 to 220 in 2019, with the number of shipmanagement operators rising to 50, placing Cyprus at the top of this category in the EU. In 2021, shipmanagement services increased to approximately 3,300 ships under various flags, with a net tonnage of 47 million. Cyprus’ shipmanagement revenues increased to €447 million during the first half of 2021 or 4.1% of Cyprus’ GDP as turnover.

The formidable Cyprus shipping industry has flourished without any state investment, although it enjoys strong state support. Cyprus’ two dynamic shipping associations – the Cyprus Shipping Chamber (CSC) and the Cyprus Union of Shipowners (CUS) – work closely with the state to constantly upgrade the maritime administration and to build up its competitive offering. The creation of a new and independent Shipping Deputy Ministry in 2018 made the sector even more efficient, autonomous, and business focused. The timing of the launch allowed Cyprus to capitalise on new opportunities for the sector from a developing natural gas sector and Brexit. These factors coupled with the country’s competitive tax incentives, led to the relocation of a number of shipping companies to Limassol, the country’s maritime capital.

A major driver of the shipping sector’s success was put in place in 2010 when, after more than 10 years of negotiations with Brussels, Cyprus secured an agreement for an upgraded and competitive EU-approved tonnage tax (TT) system. In 2020, this agreement was reapproved by the EU, and unanimously approved by the House plenum, ensuring the stability of the tax framework until 2030 and maintaining Cyprus’ prominent position in the shipping arena both on a European and international level.

The main benefit of the TT regime is the certainty it provides companies on their annual tax obligations, enabling them to do their business planning accordingly. The system has attracted scores of companies over the years, with the number tripling in the past decade. In 2012, there were 97 companies enrolled in the TT system, which rose to 275 in 2021. While other jurisdictions might have less expensive TT regimes, Cyprus’ incorporates all three types of maritime activities – ship owning, shipmanagement and chartering, making it unique in the EU where other jurisdictions might specialise in just one or two of these areas. Additionally, green incentives are being offered to companies to reward vessels that demonstrate effective emissions reductions. As of 2021, annual TT is reduced by up to 30% for each vessel that demonstrates proactive measures to reduce its environmental impact, ensuring ship owners are rewarded for sustainable shipping efforts.

The last few years have seen opportunities arise for Cyprus shipping in the wake of Brexit and natural gas exploration in the Eastern Mediterranean, however, the biggest trends that are already impacting the sector are rapid tech development, environmental challenges, dealing with decarbonisation and finding alternative fuel options to power global shipping in the future. Ship owners are also facing a predicament of whether to buy ships at this point, when in less than 10 years the tech and other spec requirements could be completely different – making it a costly and perhaps redundant investment.

The next five years will be most exciting in terms of satellite communication developments and disruptive tech being introduced to improve safety and efficiency in the industry. Much of core tech being used by shipping companies will be replaced by new smart tech, such as smart weather foresight, smart performance analytics and report alarms. Digitalisation is key to staying competitive, but industry experts say tech and AI will not replace humans anytime soon.

Speaking of the human element, shipping executives have voiced concerns that finding competent crew is a growing problem worldwide. It is increasingly difficult to attract young people of high calibre and ambition to choose a career at sea. Seafarers are both the heart and soul as well as the Achilles heel of the industry, and companies are acutely aware that all the tech in the world will never replace a well-trained and experienced crew. Shipmanagement giants such as Columbia Marlow have highlighted the industry’s need for more care and support of crew members whether on- or off-shore, to introduce more perks and better training opportunities and to create a safer working environment.

Fintech is also set to bring new ways to raise capital in shipping and introduce better ways of risk profiling for both investors and investments, and growing ship financing possibilities available through Cyprus banks will support the future growth and diversification of the sector.

Although the banks’ portfolios are still comparatively small, this development will not only increase the size and scope of the maritime cluster and create opportunities but expand the expertise in this area within Cyprus’ financial services sector. Following the financial crisis of 2013, shipping finance virtually stalled in Cyprus, but there are signs of a revival.

One improvement that shipping executives have been calling for to help Cyprus strengthen its maritime centre is to improve flight connectivity and establish more direct flights to other key hubs around the world. One historical challenge of significant impact remains for Cyprus: the size of the world fleet has doubled over the last two decades, but currently the Cyprus industry is prevented from realising its true potential by the Turkish embargo, which was unilaterally imposed in 1987 on Cyprus-flagged ships calling at Turkish ports. A settlement of the so-called ‘Cyprus Problem’ would immediately resolve this and dramatically boost the size of the country’s commercial fleet. Pending a settlement, Cypriot officials continue to press for the lifting of the Turkish embargo to be included in any package of confidence-building measures in reunification talks.

Recognised for its competence, safety and multiple advantages, Cyprus is clearly capable of competing on a global scale. Although global trade and shipping have not emerged unscathed from the Covid pandemic, the crisis has however helped to fast-track reforms and speed up the introduction of advanced communications services. This has forced the Cyprus shipping cluster to become more efficient in a shorter period of time. With its growing registry and reformed procedures, Cyprus’ shipping sector punches well above its weight standing tall as an EU jurisdiction and maritime centre that has proven it can expertly navigate through market fluctuations and evolve with new tech coming on stream. 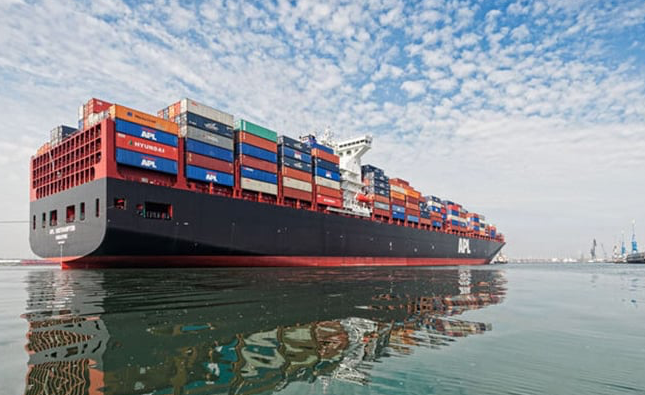 The deputy shipping ministry is organising on January 19 a hybrid webinar to analyse the opportunities, risks and prospects for the development and u ... 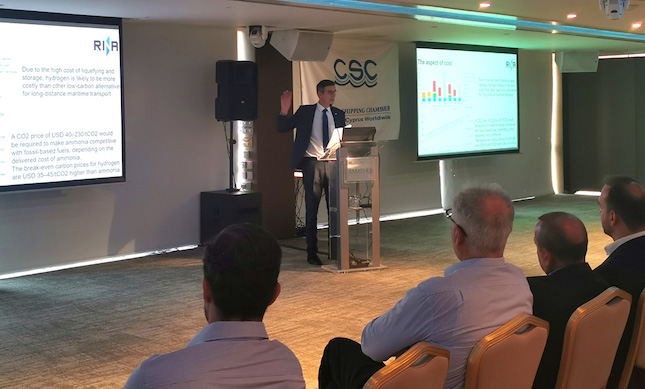 A leading expert with extensive experience in the operation and engineering of ships, has called for wider use of hydrogen as a fuel that will ultima ... 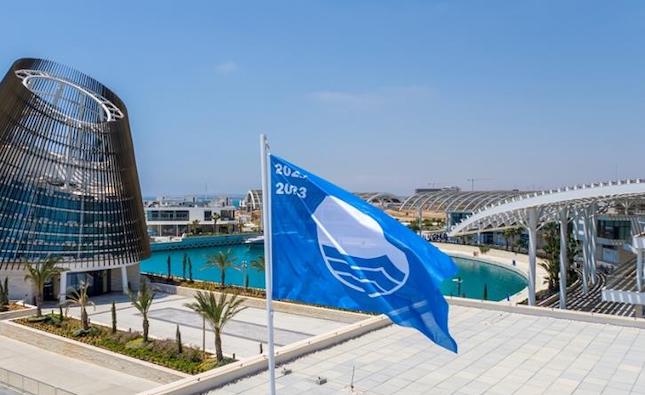 This summer Cyprus received a record number of blue flags with 74 beaches and two marinas on the island being awarded.