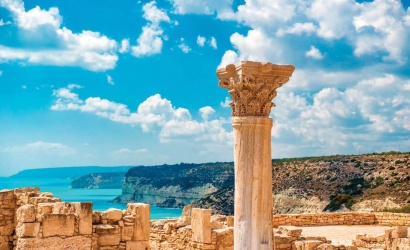 One of the most beautiful islands in the Mediterranean, Cyprus has been coveted, conquered and colonised numerous times during its 10,000-year history.

Boasting one of the oldest recorded histories in the world, Cyprus lies at the crossroads of three continents, occupying a key strategic position at the gateways of Europe, Asia and Africa. The island was once rich in supplies of copper and timber, which gave it economic as well as strategic value. In addition, Cyprus was blessed with exquisite natural beauty, a fitting birthplace for the legendary ancient goddess Aphrodite, whom tradition credits with having emerged from the waves near Paphos.

While there may be no evidence to prove this particular romantic tale, the remains of numerous ancient civilisations are littered across the island. The remains of the oldest known settlements date back to the Neolithic period, between 9000 and 6000years ago.  Even the name, Cyprus, derives from the ancient Greek word for the precious copper deposits that were already being mined and traded as early as 2500 BC. Copper was one of the most valuable commodities of the ancient world, its discovery and commercial exploitation began sometime between 3900 and 2500 BC, and as trade with the Near East, Egypt and the Aegean developed, it brought wealth and prosperity to the island.

The island’s rich natural resources also attracted the interest of a succession of dominant powers in the region, who did battle for it through the millennia. The first of these are believed to have been the Achaean Greeks who arrived in around 1200 BC introducing their language, religion and customs to the island. Cyprus was subsequently colonised by the Phoenicians, the Assyrians, the Egyptians and the Persians. In the 4th century BC Alexander the Great claimed the island, which remained part of the Greek-Egyptian kingdom until 30 BC, when the Romans arrived and Cyprus became a senatorial province. It was during this period that Saint Paul was said to have visited the island and converted the Roman governor to Christianity.

Cyprus remained a Roman possession until the empire began to disintegrate in 330AD, when it became part of the Eastern Roman or Byzantine Empire. In 1191, Cyprus was conquered by the English king, Richard the Lionheart, while he was on his way to take part in the Third Crusade. He later sold the island to the Knights Templar, who themselves sold it on to the Franks or Lusignans, a dynasty which went on to rule Cyprus for almost 300 years. The last of the Lusignans ceded the island to Venice in 1489. Despite building heavy fortifications around the island’s major cities of Famagusta and Nicosia, the Venetians were not able to withstand the invading Ottoman troops who conquered the island in 1571. Cyprus remained under Ottoman rule until the arrival of the British in 1878.

Cyprus gained independence from Britain in 1960, but with one of the world’s most complicated constitutions as its foundation with the UK, Greece and Turkey as guarantor powers, the new republic soon encountered difficulties. Inter-communal violence between the Greek and Turkish Cypriot communities, resulted, eventually, in the withdrawal from government of the Turkish Cypriot leadership in 1963. Just over a decade later, in 1974, a right-wing coup sponsored by the military junta then in power in Greece, overthrew the government of Archbishop Makarios. In an alleged attempt to protect the minority Turkish Cypriot community, Turkey invoked its guarantor power and invaded the island from the north. Despite numerous subsequent attempts to resolve the Cyprus problem, the island has been effectively divided ever since, with the Greek and Turkish Cypriot communities separated by a UN-manned buffer zone, commonly referred to as the ‘Green Line’.

In 1983 the Turkish Cypriot leadership unilaterally declared independence. The international community refused to recognise the self-styled ‘Turkish Republic of Northern Cyprus’, or ‘TRNC’, as a separate state and the breakaway republic is only recognised by Turkey.

Peace talks have been ongoing for over four decades on the basis of a bizonal, bicommunal federation and although convergences have been made, major points of disagreement include territory and power sharing. The election of Turkish Cypriot leader Mustafa Akinci in 2015 sparked new hope for a solution after negotiations began with President Nicos Anastasiades who was elected in 2013 and is now on his second term, as both leaders had the common bond of hailing from Limassol.

Several confidence building measures have come into place since, including scrapping visas for crossing the border between the two sides and linking mobile telephony networks.

Cyprus joined the European Union in 2004, and adopted the euro as its currency in January 2008, while the breakaway state continues to use the lira, though euros are often accepted with transactions.