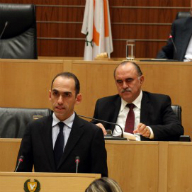 The 2014 state budget is focused on the reduction of expenditures, Finance Minister Harris Georgiades told parliament recently, adding that cuts will reach around 10%.

Speaking before the plenary session of the House of Representatives, Finance Minister Georgiades said that the government has taken a series of measures and succeeded in avoiding complete financial collapse or the risk of Cyprus exiting the Eurozone. “Certainly, we have a long way to go and difficulties remain," he said, assuring MPs that the government will do everything possible to bring the economy back on track. Georgiades referred to the successive positive assessments of the Cyprus economy by rating agencies and the first rating upgrade in three years.

He also said that a series of contacts heheld recently in Washington, Brussels and Moscow, with foreign officials persuaded him that the economy in Cyprus is far more resistant than initially estimated. “Key productive sectors have not lost their dynamic and new sectors, such as energy, are being developed in a decisive manner and that the outlook for the Cyprus economy remains a favourable one”.

Referring to the 2014 state budget, Georgiades said that its key feature is the reduction of costs, stressing that this reduction, excluding interest, repayments and reserves, reaches 10%. However, next year’s budget will show a deficit, as it did this year. Georgiades said that past governments have increased the number of personnel in the public service, as well as the spending and debt, without taking timely corrective measures. This, he pointed out, has caused a series of problems and the government today is obliged to take consolidation measures, 'at these difficult times'.

Referring to taxes, he said that many new taxes have been imposed on the people in the past two years, but said that fortunately, those taxes cannot affect business and investment activities. "We will safeguard our tax system, like all the comparative advantages of our economy", he pledged. Georgiades said that the government will combine the policy of fiscal consolidation, with an ambitious policy of modernisation and reform. In the next two years, he said, the government will promote radical reforms within the public service, the social policy, the health insurance system, the tax authorities and state organisations. Those reforms, he added, will enhance competitiveness and productivity.

Referring to the public debt, he said that in 2008 it stood at €8.4 bln while by the end of 2012 it rose to €15.4 bln. The €7 bln increase was the result of the €1.8 bln for the recapitalisation of the now-defunct Laiki Bank during the term of the previous government, while €5.2 bln was additional debt caused by continuous deficit. The minister said that this year the government has covered the capitalisation needs of the Cooperatives with €1.5 bln, which leads to a public debt that will reach 113% of GDP in 2013. But at least, he continued, “we took all necessary steps to ensure a better supervision, operation and restructuring of the cooperative sector which in turn ensure that this state investment will not have the same fate as that of the Laiki Bank”. The house will debate and vote on the state budget next week.