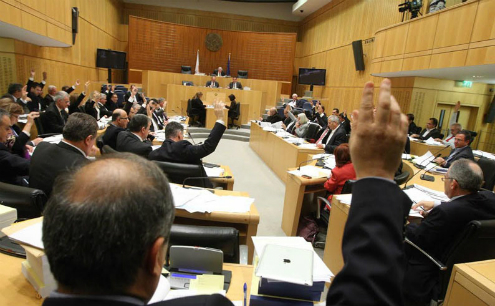 Finance Minister Haris Georgiades has described the 2016 state budget and the medium-term plan 2016-18 as balanced, without new taxes and with targeted increase in development expenditure.

Presenting the state budget before the House Committee on Financial and Budgetary Affairs, Georgiades said that “if we maintain the political and economic stability, growth is expected to surpass 1.8% in 2016 and reach 2%-2.5% in 2017,” noting that these projections exceed forecasts made by the Troika (IMF, EC, ECB).

He added that creating conditions for maintaining sustainable growth is the main target for 2016, in order to create new jobs and new opportunities.

Noting that in a few months the economy will exit the adjustment programme agreed in 2013 with its international lenders, the Minister stressed that the country is able to manage its public debt until 2018, through restructuring moves. He said that the most serious problems of the economy is high unemployment and Non-Performing Loans.

The Minister said that if state finances continue their positive trend in 2016, the government will review the tax regime and it is possible to announce new reductions in taxes. However, he said that he is not planning to announce any reduction in taxes before the parliamentary elections in May 2016.

The discussion on the state budget will cover the budgets of all Ministries and public sector services and will be concluded on November 30.

Speaking on unemployment, the Minister said that it is being stabilized since the beginning of the year, with employment growing by 0.5% on an annual basis.

He said moreover that public finances are balanced, there is marginal deficit, projected at 0.9% and a primary surplus close to 2% or better.

Georgiades also said that Cyprus has been the only programme country that has gone through adjustment without imposing additional taxes.

Public debt will become more sustainable, he said, noting that it will be under 100% of GDP in the next few years.

The Minister spoke on the need to reform the Central Bank of Cyprus (CBC), noting that the Bank`s reputation must be equivalent to credibility. He said he wrote to the Governor of the CBC and stated the government’s readiness to proceed with legal reforms.

More reforms will follow in the public administration, Georgiades added, while the ban in hiring will be in place until 2016.

The Minister rejected criticism on the purchase of new cars for the government, saying that they will replace older ones and are significantly smaller compared to previous cars.

When asked about delay in reforms, the Minister said this was the only criticism he was accepting, and added that he wished things to go faster.