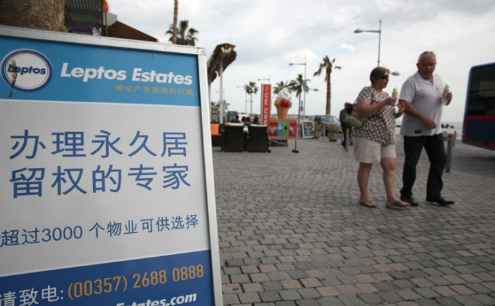 Tourism and government officials are working to find a way around strict EU visa regulations in order to be able to attract some 300,000 visitors from China a year, compared to the paltry 1,000 that visit the island at present, a meeting at the Foreign Ministry concluded.

“The processing of applications by a private provider rather than going through the consulate is a practice already applied in other countries,” Zenon explained when asked by reporters if a second diplomatic mission could be set up in another city in China.

“It is no secret that some problems exist in this respect, and the fact that Cyprus has only one embassy in China, in Beijing, and because of the huge distances it is difficult for applicants to attend the embassy in person to submit their applications which they have to do for reasons related to the requirements of the European institutional framework.”

“China is one of the largest economies today and it is natural that it is the subject of interest for the government – hence the President will visit the country accompanied by businessmen next month,” he said.

“In this context and inan effort by the government to strengthen and develop its relations with China in the economic, tourism and investment sector, we had a meeting to examine ways of facilitating and promoting tourism and business activities between Cyprus and China.”

CTO president Angelos Loizou stated, inter alia, that today we have around 1,000 Chinese tourists in Cyprus and the attainable goal is to reach 300,000, “if we can regulate the issue of accessibility.”