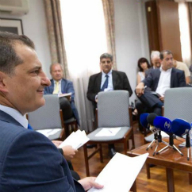 A new scheme worth €45m aimed at funding energy upgrades to existing buildings in the wider public sector, houses and commercial and industrial premises is being prepared by the Energy Ministry.

Details of the scheme, co-financed by the EU, are expected to be announced after the summer.

At the same time the ministry is preparing a study to create a model on the basis of which the government will plan its long-term energy policy, Lakkotrypis told the 2nd public consultation on support schemes for the promotion of renewable energy by 2020.

Besides the penetration of renewable energy into the electricity supply of Cyprus, the study aims at the reduction of energy cost, examining various scenarios, among which are the exploitation of natural gas reserves, energy storage and the use of electric vehicles.

Lakkotrypis said the government’s “top priority” was to implement targeted measures to reduce the cost of electricity for households and businesses.

The use of renewable energy and energy saving measures can contribute significantly to this end, he said.

“We are convinced that the time has come for renewable energy sources (RES) to penetrate into the energy supply mix and compete with conventional power generation,” Lakkotrypis said.