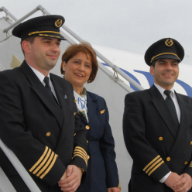 The government has pledged a €4m cash boost for the provident funds of Cyprus Airways (CY) staff that have been made redundant, as a restructure plan foresees more layoffs in a bid to keep the carrier afloat.

During a meeting at the Presidential Palace on Tuesday with leaders of the SEK trade union, President Nikos Anastasiades promised the money would be transferred to the provident funds by next month.

SEK boss Nicos Moiseos broke the news to the media coming out of the meeting. Moiseos said they and the President also discussed a series of other issues, such as measures to tackle unemployment in general, provident funds’ lack of funding, the protection of primary residences from forfeitures and the minimum guaranteed income.

The ailing national carrier has already laid off about 350 staff as it seeks to downsize in the hopes of staying afloat. A restructuring plan, agreed with unions, envisaged letting go of 490 employees in a first wave of redundancies, salary and benefits cuts for remaining staff as well as scaling down the fleet of aircraft.

As far as the airline’s provident fund was concerned, €6m was to be covered by a general finance ministry plan on provident funds, and the remaining €12m through the sale of CY property.

The government owns 70% of the airline, and has been seeking – so far without success – a strategic investor who could potentially assume a majority stake in the company. CY’s chairman recently went on record saying privatisation is the only way forward for the company.

Meanwhile 48 of the airline’s pilots are suing the CY management in protest at severe – though temporary – cuts to their benefits. The pilots union is taking legal action against the airline’s decision to reduce its contribution to the workers’ provident fund, an agreement made with other unions but not with them.

The loss-making carrier was on the brink of collapse, with the government more than once coming to its rescue. But the capital injections in turn raised red flags with the European Commission, which is currently looking into whether this constitutes state aid, prohibited under EU competition law. The Commission is expected to deliver its verdict this autumn.