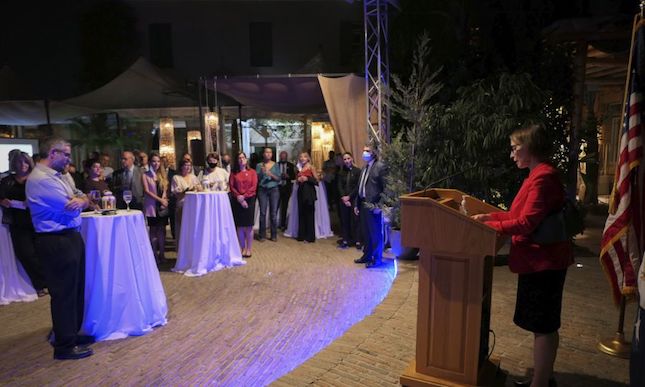 75th anniversary of the Fulbright Program

The US Embassy held a reception last week to commemorate the 75th anniversary of the Fulbright program.

US Ambassador, Judith Garber hosted the event that was held inside the UN buffer zone in Nicosia, which was of special significance considering some of the guests were from different parts of the world brought together through the success of the educational exchange program.

After addressing the guests, Ambassador Garber presented tokens of appreciation to two Fulbright scholars who played a pivotal role during the pandemic. Ms. Eldem Albayrak, who spent part her graduate work in a lab in New York processing thousands of COVID test samples at the beginning of the pandemic, and Dr. Leondios Kostrikis, Head of Laboratory of Biotechnology and Molecular Virology and Vice-Dean of the Faculty of Pure and Applied Sciences of the University of Cyprus. Dr. Kostrikis was part of the scientific advisory team navigating Cyprus through during the darkest days in the beginning of the pandemic.

Other guests included prominent alumni from both the Greek Cypriot and Turkish Cypriot communities, representatives of institutions of higher education and members of the Cyprus diplomatic corps.

Established in September 1945 by US Senator J. William Fulbright, the program encourages an international educational exchange of students from all over the world. It is sponsored by the US government and is meant to increase mutual understanding between the peoples of the United States and other countries.

Today, the Fulbright program is the most widely recognized and prestigious international exchange program in the world.

More information on the active Fulbright programs can be found on the U.S. Embassy Nicosia’s main page under “Educational Exchanges” in the Education and Culture tab on the top.