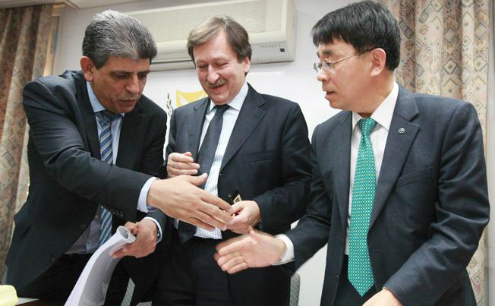 The government sealed a deal yesterday granting an Italian-Korean joint venture a concession to drill for hydrocarbons in three offshore blocks.

Three separate agreements, one for each of the prospects, were signed on behalf of the government by commerce minister Neoclis Sylikiotis and finance minister Vassos Shiarly.

The three blocks (2, 3 and 9) licensed to the ENI-KOGAS consortium lie north of a gas field that holds an estimated 5 to 8 trillion cubic feet of natural gas.

“The discovery of hydrocarbons...creates new realities and prospects for transforming Cyprus into a regional energy hub,” Sylikiotis said at the signing ceremony.

“Today we are taking yet another decisive step toward realising the hopes in our people for a new path toward prosperity, progress and peace in our country and the region,” he added.

ENI Vice President for Eastern Europe, Valerio Bracaccia, said industry officials recognised that the waters between Cyprus, Lebanon and Israel to hold much promise in terms of gas deposits.

Sylikiotis said a signing fee of €150m would flow into state coffers. That’s good news for the cash-strapped government, which only has enough money to pay salaries until March, when it hopes to secure a financial rescue package from the European Union and the International Monetary Fund.

Officials here have been arguing in their negotiations over the country’s bailout that gas proceeds will help secure the country’s longer-term public finances.

They hope such revenues can be viewed as a financial guarantee, easing the need for Cyprus’ creditors to impose harsher conditions in exchange for the bailout loan of up to €17 billion.

The first concession period will run for three years, with an option to renew for two more; under the agreement, the licensee relinquishes 25 per cent of the area of a prospect after the first period.

The respective percentages for Cyprus and the companies in the production-sharing contract are not made public due to a confidentiality agreement between the parties.

But the Cypriot side is “pleased” with its percentage, energy chief Solon Kassinis told the Mail.

Kassinis, heavily involved in the talks that led to the agreement with ENI-KOGAS, said the contract provides for “one plus one drilling.” During the first concession period the Italian-Korean consortium would carry out exploratory drilling, and if successful they would follow up with an appraisal drilling to confirm the size and quality of the reserves.

The government says there would be synergies from the licensing to ENI-KOGAS, since two of the blocks (2 and 9) run in the path of a pipeline planned to transport gas from the Noble Energy’s concession to a terminal which will convert gas into its liquefied form onshore.

Noble meanwhile has pushed back the start of appraisal drilling in its Block 12 concession because the rig has been tied up in Israel’s Leviathan field. The US firm’s license expires in October this year.

“We hope to wrap it up soon, perhaps sometime over the next 10 days,” he said.

Earlier, Kassinis revealed on Sigma television that Total has proposed drilling to a depth of 7400 feet.

The depth indicates the French company would be prospecting directly for oil, Kassinis said, which confirmed his own assessment for blocks 10 and 11.

“If we find oil, and I am certain we shall, then we can just load it onto ships and sell it,” the official said.

According to the energy chief, Cypriot waters could hold up to 60 trillion cubic feet of natural gas.