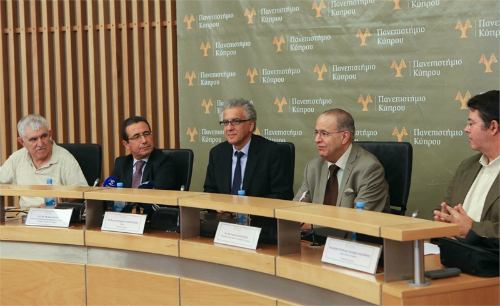 A new dimension to Cyprus-Israel ties

Foreign Minister Ioannis Kasoulides yesterday said ties between Cyprus and Israel should not be limited to energy or security but should also embrace cultural diplomacy.

Kasoulides was speaking at the signing of a cooperation agreement between the University of Cyprus and the Israeli Embassy in Nicosia for the creation of a Jewish Studies programme at the University of Cyprus (UCY). “It is extremely important that ties between Cyprus and Israel do not remain only on issues like energy or whatever other cooperation,” he said. “Cultural diplomacy is also an important tool in conducting foreign policy”. He expressed his conviction that the Jewish Studies programme would in the years to come, develop into an important addition to the existing ties between Israel and Cyprus

UCY rector Constantinos Christofides said: “The programme of teaching and research of Jewish studies, based at the Department of History and Archaeology, aims to enrich the teaching and research programme of the University. It aims to increase the bilateral awareness of the people of Cyprus and Israel allowing them to place each other and the wider region in the respective historical context”.

Israeli Ambassador Michael Harrari expressed his conviction that cooperation in the fields of education and culture would add “depth to our relations, the relations between our two peoples”. “This project, the highlight of our cooperation, will be a modest start for much wider cooperation and hopefully we will be able to push it forward in the next few years”.

The programme is funded by UCY and the Israeli Embassy. It gives the opportunity to undergraduate and postgraduate students to choose Jewish Studies options for the next two semesters. If the programme is deemed a success the period of availability will be extended beyond the initial two months.