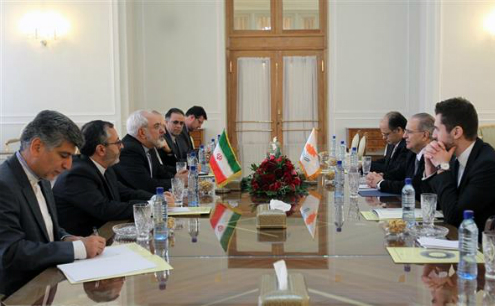 A new era in Cyprus-Iran relations

The last year has seen a significant renewal of relations between Cyprus and Iran, with the exchange of new ambassadors and several trips by high-profile delegates.

Hot on the heels of January’s trip to Iran by Foreign Minister Ioannis Kasoulides, Cyprus will send a new delegation of business and government officials to Tehran this month headed by the Minister for Energy, Commerce, Tourism & Industry, Giorgos Lakkotrypis.

The trip, organised by the Cyprus Chamber of Commerce & Industry (CCCI), will take place from February 17-19 and aims to broadly promote business relations between Cyprus and Iran. Departing from Larnaca on February 17, the focus of the trip will be a business forum in Tehran on February 18, with a presentation on Cyprus as a business and investment Centre.

Over 20 companies – including big names in professional services and construction – have already signed up to participate in the trip. Alexandros Ioannides from the CCCI is confident that the tour will be a success, placing special focus on all that Cyprus has to offer. According to the Ministry, special emphasis has been given to setting up business meetings (B2Bs) between Cypriot and Iranian companies.

Cyprus-Iranian bilateral relations as well as regional developments were recently at the focus of January’s two-day official visit by Cyprus Foreign Minister Ioannis Kasoulides to Tehran.

During the visit, representatives from both countries recognise the need for finding ways to reinforce the connection, primarily in the fields of tourism, science, archaeology, higher education and culture. Both sides agreed to intensify the meetings experts from the two sides to finalise the pending bilateral agreements.

Cyprus has a long history of cordial relations with Iran, including several bilateral agreements dating back to 1989. Among the most recent are agreements on the promotion and protection of investment, merchant shipping, medical science, culture, education and tourism.

Recent figures show imports from Iran have been falling off in the last years, reaching €0.8 million in 2013, of which 44% were fruit, nuts and citrus fruit peels. In 2013, Cypriot exports to Iran reached €5.6 million, of which 89% concerned exports of pharmaceuticals.

Cyprus offers many benefits as a location for setting up a business. Its economy and infrastructure is rebuilding itself on renewed and stronger foundations after the 2013 banking crisis. With its highly-educated population, it is a peaceful, neutral and multicultural eastern Mediterranean location with one of the lowest crime rates in Europe and the region. The nation prides itself on the excellence of its tertiary sector and strong consumer market.

Boasting one of the lowest corporate tax rates in the European Union (EU) – at only 12.5% – the island is an ideal jurisdiction for Holding Companies. Add to this the extensive network of double tax treaties, which allow businesses to avoid being taxed twice on income earned from dividends, interest and royalties. Also of interest is the country’s status as one of the world’s top 40 economies for investor protection.

Last September, the Chambers of Commerce of Iran and Cyprus signed a memorandum of cooperation, in a bid to give a new impetus to the business ties between the two countries. The memorandum was signed in Nicosia by the Presidents of the two chambers and paves the way for this month’s Cypriot trade mission.

“We consider Mr Shafei’s visit in Cyprus as very important,” Pilides said afterthe meeting, pointing out that Cyprus should exploit the opportunities arising from the recent improvement in international relations with Iran – and especially with the EU.

“Our aim is to broaden the range of products exported or the products we need to import from Iran, as well as to explore investments possibilities between Cypriot and Iranian businesspeople,” Pilides said last September.

Replying to a question on energy issues, Shafei said Iran is famous for its experience in the energy sector and more specifically in oil and gas, petrochemical industry.

“We are ready to help our Cypriot friends in this regard and vice versa. Cyprus also has very good experience in renewable energy and we are ready to use this experience and know-how in this new sector,” Shafei added.