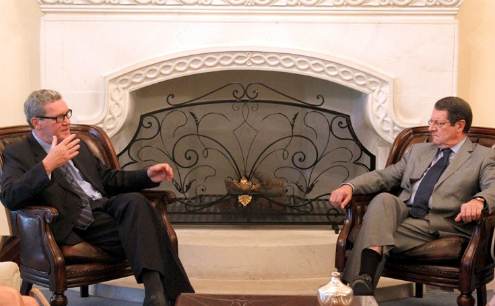 A solution would provide a huge boost to the economy: Downer

Settlement of the Cyprus problem will give the island’s economy a huge boost, the United Nations Special Adviser said on Wednesday.

“Overall you can make an argument that a solution of the Cyprus problem would give the economy, including the Turkish Cypriot economy, a huge boost, not a small boost, a huge boost,” Alexander Downer said following a meeting with President Nicos Anastasiades.

Downer said he was expressing the view of some Cypriots who thought that an agreement would “have a wow factor” since people did not really expect it to happen. “People will be hugely impressed that there was an agreement and such an agreement will lead to a very significant lift in economic confidence, it will lead to substantial new investments in Cyprus,” Downer said.

However, there were also those who felt that this was not the time to push people. “Some people on the other hand argue that people are feeling very vulnerable at the moment and they don’t want to be bullied while they are feeling vulnerable, that is understandable as well,” the Australian diplomat said.  “But my overall view is that a solution to the Cyprus problem would be a huge boost to the Cypriot economy, there is no doubt about that.”

Downer said the UN was now doing preparatory work for the talks between the two communities, which the organisation aimed to start in October. “We the UN are satisfied with the quality of the preparation and once the leaders get together their meeting and subsequent meetings could really be productive that it’s a result oriented approach which would lead to a negotiated agreement, but the important thing is not so much the timing of the first meeting, but to make sure that the preparation is properly done and then we will start the meetings,” Downer said. “So our aim is sometime in October but we just have to wait and see how the preparations go.”