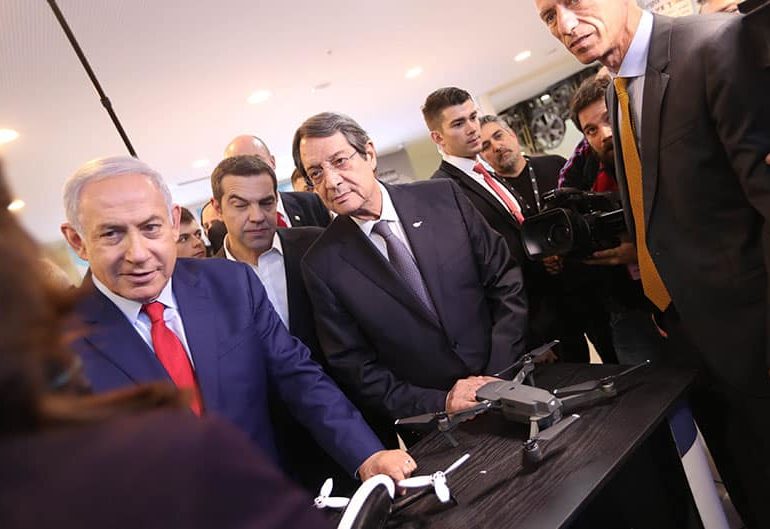 A step closer to an east Med ‘alliance’

The leaders of Cyprus, Greece and Israel said recently they were ready to proceed with an inter-state agreement concerning the EastMed pipeline, following a trilateral summit in Beersheba, Israel.

The agreement will be signed pending approval from the European Commission, as the pipeline project has been designated an EU Project of Common Interest (PCI).

Speaking after the tripartite summit, the fifth in a series, president Nicos Anastasiades said the decision to go ahead with the pipeline was among the most important and substantial decisions taken during the proceedings.

“We have reached an agreement,” he said, noting that the text will be signed once it receives the approval of the European Commission.

The agreement also contains references to the security of energy infrastructure.

Anastasiades added that together with the pime ministers of Greece and Israel, Alexis Tsipras and Benjamin Netanyahu, they reaffirmed their political determination to promote the subsea electricity cable known as the EuroAsia Interconnector.

“I deem that today’s summit was entirely successful with regards to the goals set, and I feel particularly satisfied because the development of our tripartite mechanism shows in a very tangible way that it has become a credible model of constructive regional cooperation, for the benefit of the people and the region in general,” Anastasiades said.

“The field of energy comprises a key component of our cooperation,” he said in remarks after the summit.

On a bilateral level, Cyprus and Israel signed a memorandum of understanding on cyber security and in the field of meteorology, as well as a joint declaration for cooperation in the exploration of outer space for peaceful purposes.

For his part, Netanyahu called the EastMed “a pipeline for prosperity.”

He added that the signing of the inter-state agreement was expected to take place in 2019, in Greece.

The Israeli leader noted that the pipeline is an important project for Europe’s energy security, for the economies of Cyprus, Greece and Israel and for reinforcing the already important cooperation between the three countries.

Commenting more broadly on the trilateral cooperation, Greece’s Tsipras said the aim was to include in the future more countries with energy resources in the region.

“We aim to exclude no one,” he noted.

Participating in the tripartite summit for the first time were the United States, represented by the US ambassador to Israel, David Friedman.

“The United States supports the trilateral partnership between Israel, Greece and Cyprus. This partnership is an anchor of stability in the eastern Mediterranean and is based on common interests and common values that the three countries share together with the USA,” Friedman said.

“The USA wholly supports the project and its goals that help diversify energy sources throughout the entire region and to help bring energy security to Europe.

“I call on all countries in this region to help ensure that the project is successful.”

As part of the deal, the three countries will set up a permanent secretariat in Nicosia whose task will be to monitor and coordinate the implementation of trilateral projects.

The agreement was given much play in the Israeli press.

The Jerusalem Post quoted sources as saying the establishment of a permanent secretariat signalled that the three nations are moving from being good friends to forging an actual alliance.

“The establishment of a secretariat, a development one source said ‘institutionalises’ the relationship and gives it a greater sense of permanence, comes as the US – increasingly concerned about Russia’s advances in the eastern Mediterranean – has expressed both heightened interest and support for Israeli, Greek and Cypriot cooperation,” the paper said.

At a business conference a day earlier, Netanyahu underlined the importance of the pipeline project.

“This will turn Israel into a player in the global energy field; all signs indicate that it could run forward. This will, of course, strengthen our diplomatic capability which, to the same extent, of course, is also strengthening the economy and the military, because they are all related,” he said.

Following the launch of a US-Greece strategic dialogue last week in Washington, the US State Department issued a statement saying that during that meeting Greece discussed its trilateral partnership in the eastern Mediterranean, “and the United States expressed interest in increasing its support for the Greece-Israel-Cyprus trilateral discussion, as invited.”

US Secretary of State Mike Pompeo said after that meeting that the eastern Mediterranean is “an important strategic border. The US is working to strengthen our relations with stable democracies and democratic allies there. Allies like Greece and Cyprus and Israel.”

According to Greek media reports, Washington is examining the prospect of a four-way meeting between the US, Greece, Israel and Cyprus at the level of foreign ministers.

Some industry experts believe the four governments and the EU cannot fund the EastMed project, which requires investor participation, as well as buyers for the gas.

The pipeline is designed to initially carry 10 billion cubic meters a year from the east Mediterranean to Greece, about 1,900km, where it will connect to the Poseidon pipeline to Italy, about 300km.