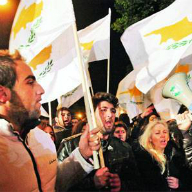 A year after the ‘bail-in’

The Cyprus Republic has been praised for its economic reforms and its continued efforts to implement the troika’s Memorandum of Understanding.

As President Anastasiades said, “Despite the difficulties which we are facing due to the ongoing economic recession, we can achieve a miracle”. Undoubtedly, the gloomy estimates made by many economic experts and financial analysts about the Cypriot economy, especially since last March, have been disproved mainly because of the efforts made by the Cypriot people.

The economic conditions leading up to last March’s bailout were a result of political, economic and banking policies which failed to harmonise with the real needs of the system. That, along with a series of other events, such as the Greek debt haircut, was the straw that broke the camel’s back. Since then, the burden has essentially rested on Cypriot citizens, who are dealing with unemployment and poverty. According to the European Economic Forecast, the economic downturn will lead to further increases in unemployment, rising from 16% in 2013 to 19.2% in 2014.

The island’s middle economic class risks being eliminated, since many of the small and medium enterprises are closing down daily, whereas others are likely to fade away. Such negative effects are expected when an economy shrinks, however, in the case of a society of only 850,000 inhabitants, the European economic authorities should take more cautious measures, especially towards vulnerable groups and young people. Despite salary cuts, everyday life remains expensive. Electricity prices and some essential consumer goods such as milk are among the most expensive in the EU, according to the figures of Eurostat. The state’s immediate intervention is required in these areas.

Even though Cypriots appear disappointed by both local and European politicians in the wake of the bailout, they have demonstrated exemplary maturity, putting their personal disagreements on the back burner. Cypriots have chosen a very different way to implement its Memorandum than Greece did. There are problems that should be sorted out in order for the island’s new economic model to function properly as Cypriots struggle to regain their previous prosperity. However, those responsible for the destruction of the economy should be punished. This will be the so-called ‘miracle’.