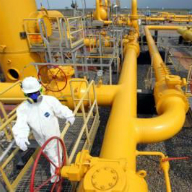 President of the Cyprus Hydrocarbons Company (CHC) expects significant developments, which will enhance the option of creating an onshore LNG terminal at Vasilikos.

"This effort to speed up the drilling program will allow us to have some data soon, which will hopefully enhance our choice in creating the onshore terminal," said Onoufriou in an interview with CNA.

At the same time, Onoufriou pointed out that an onshore LNG terminal remains the main option and the government’s goal, because it is expected to have multiple benefits for the Republic. “With the acceleration of the drilling program, we will have some significant developments that are expected to help the appropriate planning," she said.

Onoufriou also said that the best option for the exploitation of hydrocarbons is the one that will be most advantageous for Cyprus and its people on a long-term basis, and this will depend on many factors that will affect the final decisions.

"Our first choice is the construction of an LNG terminal at Vasilikos which has many advantages for our country, such as flexibility in the distribution of natural gas to international markets, as well as the fact that the construction and operation of the terminal will generate growth and create jobs for several years. It will also help us to develop partnerships with neighbouring countries in the energy sector, and will highlight Cyprus as an energy centre for the region of South-Eastern Mediterranean," she said.

She noted however that to achieve the objective of the onshore terminal, there should be enough natural gas reserves, either from Cyprus or in cooperation with neighbouring countries such as Israel. At the same time she said that pre-sale of gas reserves could be considered at a later stage when there is more specific data available.

Regarding other options considered by the Republic, for hydrocarbons exploitation such as cooperation with Egypt, Onoufriou said that at a later stage there could be a combination of different methods to channel natural gas.

"We have to understand and follow international developments in all of these issues to be able to evaluate all available opportunities. Within this context, it is good to explore the various possibilities in order to make our choices on an informed basis,” she said.

Regarding the feasibility study for a pipeline linking Cyprus and Greece, the President of CHC said that the competent bodies monitor the development of this feasibility study, which could offer an alternative in the future.

"It’s good to be aware of these developments and in the future there could be a combination of these possible routes for natural gas," she explained.

The President of CHC told CNA that events in Ukraine highlighted once again the importance of having the option to supply natural gas from the region of Cyprus to Europe, thus helping to ensure Europe’s energy security.

"It’s an important perspective and we need to see all the facts in order to find the best course we can go," she added. She noted that the international situation is constantly changing and so is the data of Cyprus in the field of hydrocarbons.

Commenting on the quantity of hydrocarbons (4 trillion cubic feet) found in the Cypriot EEZ, a less than anticipated amount, Onoufriou said that there are always uncertainties in the exploration and extraction of hydrocarbons as well as changes in the international scene which must be taken into account in planning.

As she said, in some years there might be very important discoveries that can change the scene, both in conjunction with the needs of Europe and global needs. Regarding the possibility of finding oil in Cyprus’ EEZ, Onoufriou said there are prospects, however the priorities are still under evaluation. "At this stage drilling has begun for natural gas. Sometime in the future it is also possible to start drilling for oil," she said.

She added that each company processes its data, seismographic and other as well as its chances of success either for natural gas or oil. The companies cooperating with the Cyprus government suggest the drilling program based on these assessments, she added. "The issue of oil is on the table too. When the time is right, we will possibly proceed with this as well”, she noted.

Preliminary results of an appraisal well carried out by Houston-based Noble Energy for natural gas in Block 12 of Cyprus’ Exclusive Economic Zone estimate the hydrocarbon reserve between 3.6tcf and 6tcf with a gross mean resource of 5tcf. Noble Energy operates Block 12 with a 70% working interest. Delek Drilling Limited Partnership and Avner Oil Exploration Limited Partnership each own 15%. Total E&P Cyprus Ltd has been granted a license for seismic exploration for oil and gas in block 10 and in parts of blocks 6, 7 and 11 of Cyprus’ EEZ.