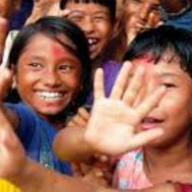 Completing 15 years in Cyprus and Greece, ActionAid holds a three day event, featuring a photograph exhibition and a documentary screening on Ethiopia.

The photograph exhibition took place by the award-winning photographer CNA, Katia Christodoulou, entitled 'Ethiopia. A big hug', while the documentary 'Ethiopia. A parallel world,' was screened by journalist from RIK, Katerina Charalambous. In addition, foster parents shared their foster care experiences with the public.

All photographs and documentaries were shot in Ethiopia during a trip to the community Azernet of ActionAid, where people live in extremely impoverished conditions, where even the water is the most valuable commodity. The images are shocking and an example of the adverse conditions in which people live. Meanwhile, they show the dignity and hospitality of these people. There are portraits and photos with smiling faces greeting spectators of the report and documentary.

The public had the opportunity to espouse the daily life of people in poor countries in Africa, through the foster parents of ActionAid, who have lived together and have seen the efforts to overcome problems and improve their lives. The volunteers of ActionAid expressed through their words, a feeling of warmth and real human relationships developed by people who are seemingly so different.