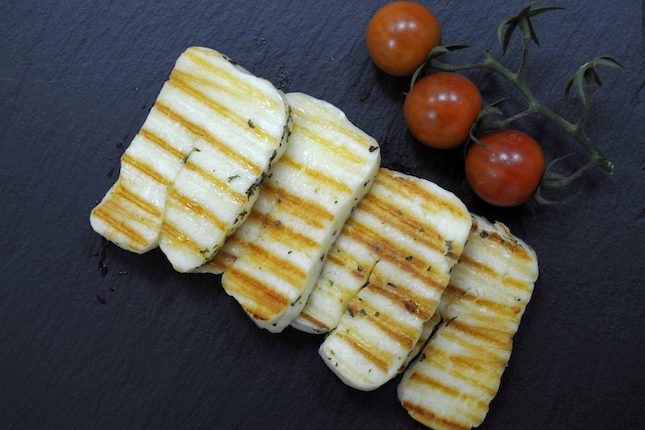 The adoption and publication of halloumi and hellim as a Protected Designation of Origin (PDO) product is expected mid-April, Miriam Garcia Ferre, European Commission spokesperson for trade and agriculture said Tuesday.

Following Monday’s registration of Cyprus’ traditional cheese, Ferre said the process for the adoption of the legal text will now be launched, with the process and its publication expected to be wrapped up by mid-April.

During a visit paid by President Nicos Anastasiades and Agricultural Minister Costas Kadis to the Pantziarou Dairies halloumi production factory on Tuesday, Anastasiades said PDO status for the cheese could garner many benefits for both communities.

The development will allow halloumi and hellim to be traded between the two communities as long as all EU hygiene and safety standards are met, while also allowing inspectors to cross to the other side before the product can be exported to the EU with a stamp of approval from the Republic of Cyprus.

Kadis said that for about a year there will be no trade of the product from the north, allowing the independent inspectors to certify that the region is free from animal diseases.

The Agriculture Minsitry also said the timing of the decision sends a message to Turkish Cypriots indicating the benefits to be reaped through EU procedures in a unified country.

The value of exports has seen a similar upward trend of 43% within three years, reaching €223.7 million in 2019, making halloumi the island’s most important export product in terms of value after medicines.

The UK continues to be the cheese’s main export destination, absorbing approximately 47% of Cypriot total halloumi exports between 2017 and 2019, with an average of 13,545 tonnes annually and an average annual export value of €89 million.

Sweden is the second most important export destination for the cheese product having absorbed 15% of total exports during those three years, with an average of 4,246 tonnes annually and an average annual value of €28.7 million. Germany, Austria, Denmark and Greece follow.

Markets outside Europe include Australia with 1,265 tonnes annually, Saudi Arabia with 736 tonnes annually and the US with about 436 tonnes every year. China could also be a potential market for halloumi exports, particularly following a bilateral agreement signed in November 2018 on milk and cheese products exports.

Local halloumi consumption stands between 3,500 and 4,000 tonnes on an annual basis.