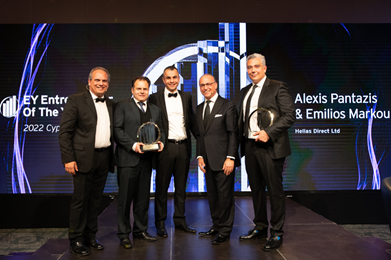 EY Cyprus has announced that Alexis Pantazis and Emilios Markou, Co-Founders and Executive Directors of Hellas Direct have been named EY Entrepreneur Of The Year™ Cyprus 2022 (EOY) winners, during a ceremony and gala dinner held on February 17th at the Parklane Resort & Spa in Limassol.

The event was attended by the President of the House of Representatives, the Minister of Finance, the Deputy Minister of Research, Innovation and Digital Policy, members of the parliament, and other government officials, as well as the business community and the media, while it was also live streamed for the wider audience.

The EY Entrepreneur Of The Year™ program, launched for the first time in Cyprus, is a unique global program that recognizes entrepreneurial achievement among individuals and companies that demonstrate vision, leadership and success, and work to improve the quality of life in their communities, countries and around the world. The awards are one of the most prestigious and widely recognised business awards globally, with participants from more than 145 cities and 60 countries around the world, and a history of more than 30 years. The national winners will represent Cyprus at the EY World Entrepreneur Of The Year™ Awards, which will take place in June in Monte Carlo.

The winners were selected by an independent panel of distinguished judges, comprising of Theo Paphitis, Chairman at Theo Paphitis Retail Group and a Dragon on Dragons' Den, Anna Protopapas, President and Chief Executive Officer at Mersana Therapeutics, and Dr. Nikolas Mastroyiannopoulos, Chief Scientist for Research & Innovation of the Republic of Cyprus. Candidates were assessed on the basis of six main criteria, entrepreneurial spirit, value creation, strategic direction, national and global impact, innovation and purpose-driven leadership.

Alexis Pantazis and Emilios Markou are co-founders and Executive Directors of Hellas Direct.

Prior to Hellas Direct, Alexis Pantazis was an Executive Director at Goldman Sachs where he led principal investing and new strategic initiatives for the firm in the European investment management field. A former strategy consultant with the Boston Consulting Group, he also worked for Miramax Films in New York and the Competition Directorate General of the European Commission in Brussels. Alexis is a Fulbright and British Chevening Scholar, a Robert & Diane Levy Fellow and an Endeavor Global Entrepreneur.

Emilios Markou, before founding Hellas Direct, was a Director in the European Financial Institutions Structuring team at Barclays Capital. Prior to that, he was an Executive Director at the Goldman Sachs Investment Banking Division where he led a number of projects within the firm's European insurance practice. A former strategy consultant with McKinsey & Company, Emilios advised several European, US and Asian clients on numerous strategic issues in insurance, banking, energy and transportation. Emilios is a Fellow of the Institute of Actuaries (FIA) in the United Kingdom and an Endeavor Global Entrepreneur.

Commenting on the winners, Stelios Demetriou, EY Entrepreneur Of The YearTM Cyprus Lead Partner and Head of Strategy and Transaction Services of EY Cyprus, said: “As leaders who have advanced the insurance sector, Emilios and Alexis exemplify many of our Entrepreneur Of The Year values. In an unprecedented era for business, our national winners showed an exceptional level of resilience and agility, demonstrating the true spirit of entrepreneurial leadership, pivoting as necessary to keep their commitment to society at the centre, while also continuing to build a successful company rooted in elevating their people and community stakeholders.”

Opening the ceremony, Ronald Attard, Country Managing partner of EY Cyprus, said: “The first Cyprus EY Entrepreneur of the Year awards come at a time of dramatic changes, that will have a drastic impact, on our business, our work, but also our very lives. Against this background, we are honouring entrepreneurs whose business decisions will help transform our economy and redefine its objectives in the coming years. Entrepreneurs who are changing the terms of the game, who understand the importance of excellence, who are investing in innovation, identify opportunities and have the ability to turn them into viable business plans.”

Kyriacos Kokkinos, Deputy Minister to the President of Cyprus for Research, Innovation & Digital Policy, noted in his keynote speech: “I am delighted to join you all today to celebrate the best of Cyprus’ entrepreneurship. The calibre of entrepreneurs in this programme is truly outstanding. Each and every one of you are the backbone of our economy, supporting and creating jobs, boosting growth, and improving the lives of our citizens. These awards are an important milestone in our national business agenda; an opportunity to recognize the outstanding achievements of all the entrepreneurs in this room. Achievements that create value for our country, advance innovation and stimulate economic activity. Achievements that complement and support the efforts of the Government for a quick recovery and sustainable development.”

Theo Paphitis, Chairman at Theo Paphitis Retail Group, Dragon on Dragons' Den and Chairman of the EOY Cyprus Judging Committee, also attended the ceremony. Theo was interviewed in a fireside chat by EY Entrepreneur of the Year Cyprus Lead Partner, Stelios Demetriou, where he commented: “I am incredibly proud that Cyprus at last is going to send someone to the final. Cypriots have entrepreneurial spirit in bucket-loads. Being an entrepreneur is important, as it is a career path that drives the economy.” Theo also talked about decision-making, overcoming challenges and the importance of work ethic.

The national winners were selected among this year’s finalists, who were: