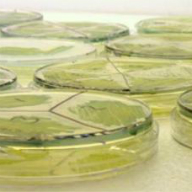 Algae- the biofuel of the future

Academics representing 12 organisations from six countries, including Cyprus, are researching the production of liquid biofuel from microalgae in the Mediterranean.

Renewed interest has been encouraged by the commercial value of algae as a fuel solution alternative to oil. Research organisations, academic institutions, energy agencies, private organisations from Cyprus, Greece, Italy, Malta, Lebanon and Egypt are working together on the new technology through the MED ALGAE project. The Agricultural Research Institute and Cyprus Energy Agency recently also held a seminar to present the project’s first results. Their work is based on new technology which aims to contribute to the goals of the EU’s long-term strategy on climate change and energy.

According to Dr Polycarpos Polycarpou, a senior Agricultural Research Institute official, some kinds of microalgae can produce up to 60% of their weight in a form of oil that can be made into biodiesel. Presenting the advantages of microalgae at the recent seminar, Polycarpou also noted that algae could develop 20 to 30 times faster than anything cultivated on land. Algae can also produce up to 300 times more fuel per 1,000 square metres than other conventional types of oil cultivations including rapeseed, palm, Soya or jatropha.

Because algae have a harvesting cycle of between one to ten days, they, in addition, facilitate many harvests within a short time period. Also, because their cells can be developed in a liquid suspension where they have more affective access to water, carbon dioxide (Co2) and dissolved nutrients, microalgae can be produced as large quantities of biomass and oil either in open ponds or in photobioreactors. Microalgae can also be cultivated on stretches of land that are not suitable for other types of crops, for example on sterile land or soil with excess salt etc.

Significant interest in the development and prospects of microalgae cultivations in Cyprus has come from industries which emit Co2 into the atmosphere such as power stations, cement makers, kilns using biomass, and buildings requiring a large amount of heat such as green houses and hotels as well asthose processing liquid waste. The efforts to produce liquid biofuels from micoalgae in the Mediterranean (sea water) is co funded by the EU within its European Neighbourhood and Partnership Instrument (ENPI) - Mediterranean Sea Basin Joint Operational Programme.

At the seminar, Agricultural Research Institute official, Michalis Omirou, spoke about the isolation of part of the micro algae for the production of biofuels. He said renewable energy sources were crucial at a time when using fossil fuels was not a sustainable option. Omirou added that the fuel price crisis had put great pressure on a global economy that was already in recession. According to Omirou, the financial crisis has made it imperative for new job places to be created as well as for a reduction in the cost of production. He also noted that climate change made a significant reduction in green house gases crucial.

Commenting on future opportunities, Omirou referred to the pledges industries including the Electricity Authority of Cyprus (EAC) had made on reducing their production of greenhouse gases. Studies in the areas of Larnaca Marina and Liopetri River, where there has been algae cultivation, has shown that Cyprus waters are rich in algae diversity with 33 different kinds of growth found. “Of these, 35% we found to incorporate over 30% of the oil and so a satisfactory amount to produce the biomass.” It was also determined that weather conditions play as significant part in algae cultivation, where lower temperatures have a negative effect on production. Growth slows down significantly from 16 °C downwards. Statistically, there is also a significant relation between the season and availability of nutrients, he said.

Anthi Charalambous, director of the Cypriot Energy Agency said the first pilot facilities had already been created in Cyprus, Lebanon and Egypt with more currently being set up in Malta and Italy. The aim of the work is to strengthen the production and use of alternative fuels from microalgae through the creation of specialised laboratories as well as pilot facilities including a Mediterranean Regional Centre for bio-production in Alexandria, Egypt to test the produced bio diesel and also act as a training centre, as well as a venue for demonstrations and conferences in the region. By the end of the year, she said, significant results from the production of biodiesels would be ready. Currently, the most suitable spots for the collection and processing of microalgae for the potential production of bio diesels are also being documented.