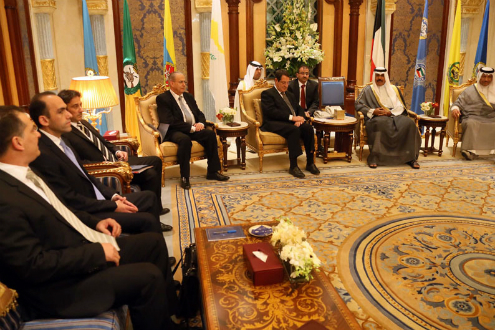 Cyprus and Kuwait have signed a series of agreements during a two-day official visit to the Gulf state by President Nicos Anastasiades.

Anastasiades held talks with the Crown Prince of the State of Kuwait NawafAl-Ahmad Al-Jaber Al-Sabah as members of the delegations of the two countries discussed bilateral issues. “We had the opportunity to explain the possibilities that Cyprus offers but also to reiterate the friendly relations between the two countries,” the president said. “Idiscerned a very friendly climate and a willingness (on the part of Kuwait) to contribute to the effort that we are making for the recovery of the economy.” Anastasiades is accompanied by the island’s foreign, finance, and energy ministers. Earlier in the day, Anastasiades met with the Prime Minister of Kuwait, Jaber Al-Mubarak Al-Hamad Al-Sabah.

The two delegations discussed a number of subjects, including bilateral cooperation on investment and further strengthening of the political, economic, and commercial ties between the two countries. Following the talks, Cypriot and Kuwaiti officials signed a series of bilateral agreements including cooperation in fighting terrorism, organized crime, drugs trafficking, and illegal migration. Agreements were also signed for cooperation in the areas of tourism, education, and health.

Energy Minister Giorgos Lakkotrypis, who also holds the commerce and tourism portfolios, said he discussed ways to increase tourist flow from Kuwait to Cyprus. Lakkotrypis also exchanged views with the Kuwaiti oil minister whom he invited to Cyprus. “I invited him to Cyprus to discuss how Kuwait can get involved in activities we are engaging in,” Lakkotrypis said.

During the meeting between the two countries’ foreign ministers, Kuwait announced a €200,000 donation to the islands committee for missing persons.