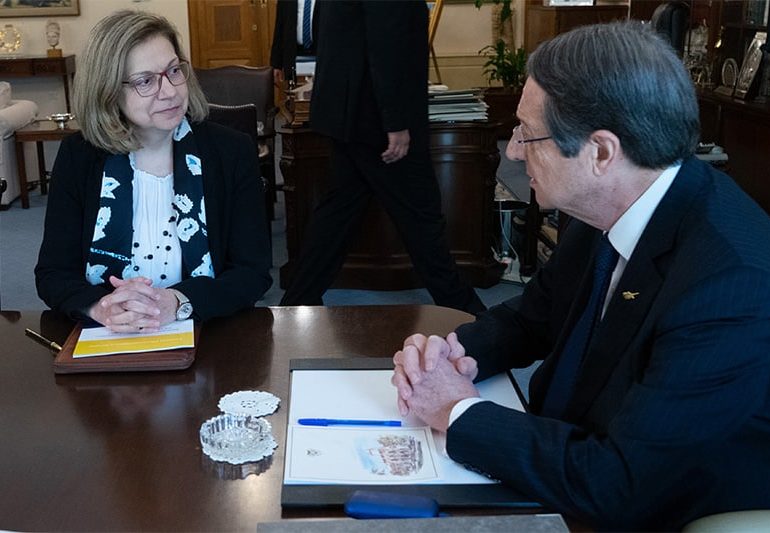 The Cyprus Hydrocarbons Company (CHC) is in “advanced talks” with Noble Energy and its partners over the renegotiation of the production-sharing contract for the Aphrodite gas reservoir, the organisation’s chairman said recently.

Toula Onoufriou was speaking to reporters after a meeting with President Nicos Anastasiades, where she handed over a report recapping the CHC’s activities over the past five years.

Other major challenges going forward, she said, included ongoing negotiations for a gas sale agreement between the Aphrodite partners and buyers in Egypt.

There is also the matter of awarding an exploration licence for block 7. Last October the government invited bids from companies already licensed to explore offshore Cyprus to express an interest in the block. Energy companies Total and ENI applied.

According to Onoufriou, over the next period of time energy companies will be informing the government of their plans and timetables to drill offshore Cyprus. This would include exploratory as well as appraisal drilling.

The recent discovery of the Glafcos play in block 10 (licensed to ExxonMobil) has given “a new boost” to hydrocarbons-related activity, she added.

In February Exxon announced a natural gas find estimated at between 5-8 trillion cubic feet (tcf). The actual recoverable gas is thought to be about 80 per cent of that – or between 4 to 6.4 tcf.