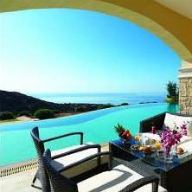 Aphrodite Hills to be rebranded by Sensatori

The Sensatori Aphrodite Hills Resort Hotel Cyprus will be managed by Atlantica Hotels & Resorts, a TUI Partner established in 1981, which currently operates 33 hotels in Cyprus, Greece and Egypt, including Sensatori in Crete and Sharm El Sheikh.

According to an announcement, the Hotel will undergo a renovation schedule during the winter months, with the addition of swim-up rooms and suites, an adult pool area, purpose-built family rooms and other facilities.

The franchise contract with InterContinental will be discontinued at the end of 2014. “We are all looking forward to the beginning of a new era for the Hotel, consisting of exciting challenges and fresh opportunities that will arise, as we exclusively become the first location in Cyprus for a Sensatori Hotel,” the announcement said.

The Hotel will be closed for operation from December 7 to March 31, 2015. All other Elements at the Resort i.e. Aphrodite Hills Holiday Residences, Aphrodite Hills Golf, The Retreat Spa, the Annabel Croft Tennis Academy, as well as all restaurants and bars at the Village Square will continue with their normal operation as usual under the existing management of Aphrodite Hills Resort Ltd.