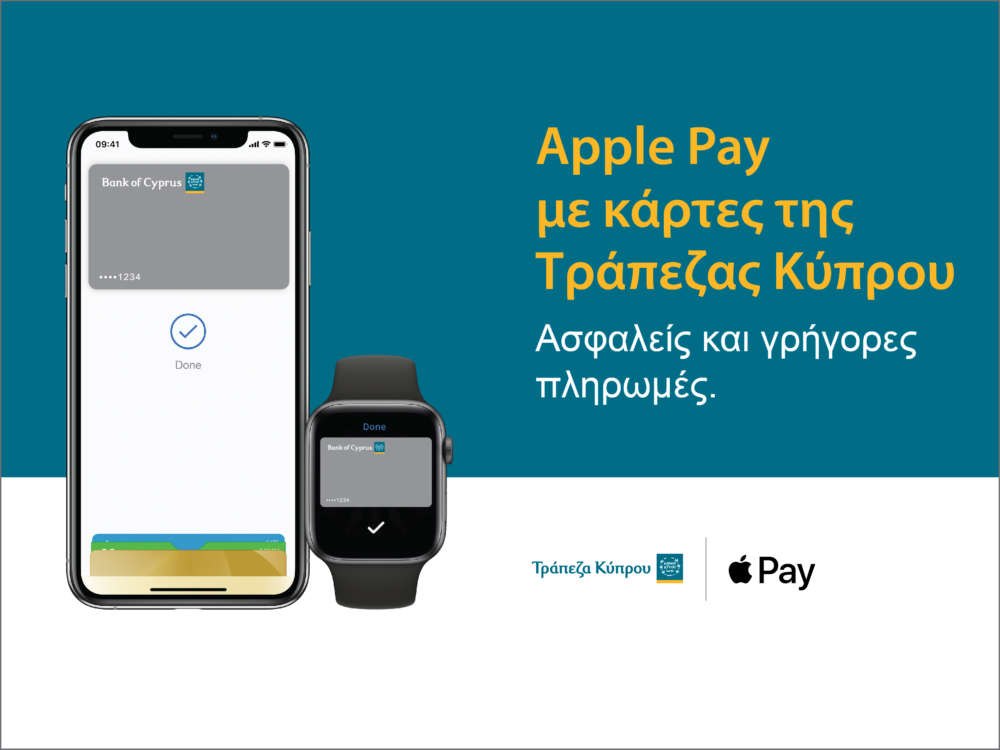 Bank of Cyprus is bringing customers MasterCard in Apple Pay offering an easy, secure and privateway to make mobile payments.

Security and privacy are at the core of Apple Pay. When you use a Bank of Cyprus MasterCard credit or debit card with Apple Pay, the actual card numbers are not stored on the device, nor on Apple servers. Instead, a unique Device Account Number is assigned, encrypted and securely stored in the Secure Element on your device. Each transaction is authorized with a one-time unique dynamic security code.

Apple Pay is easy to set up and users will continue to receive all of the rewards and benefits offered by all cards. In stores, Apple Pay works with iPhone SE, iPhone 6 and later, and Apple Watch.

Online shopping in apps and on websites accepting Apple Pay is simple with Touch ID, or just double-click the side button and glance at your iPhone X to authenticate with Face ID. There’s no need to manually fill out lengthy account forms or repeatedly type in shipping and billing information with Apple Pay. When paying for goods and services on the go in apps or Safari, Apple Pay works with iPhone 6 and later, iPhone SE, iPad Pro, iPad (5th Generation), iPad Air 2, and iPad mini 3 and later. You can also use Apple Pay in Safari on any Mac introduced in or after 2012 running macOS Sierra and confirm the payment with iPhone 6 or later or Apple Watch, or with Touch ID on the new MacBook Pro and MacBook Air.