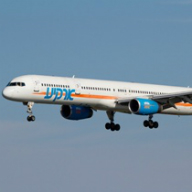 Arkia Airlines will now provide connections between Larnaca and Tel Aviv with two flights per week, as part of its objective to develop the travel traffic between Cyprus and Israel.

The Israeli airline, Arkia Airlines, has appointed Orthodoxou Aviation Ltd in Cyprus, as General Sales Agent (GSA). Orthodoxou Aviation Ltd which specializes in the management of airlines and tourism services will manage all sales and marketing activities of the airline in the Cyprus market. With this new collaboration Arkia Airlines has as objective the development and growth of the travel traffic between Cyprus and Israel. Arkia Airlines was founded in 1949 and is the second largest airline of Israel. It operates regular flights to22 international destinations and is one of the most important airlines of Israel with a large network in many European countries.

Mr. Anthonis Orthodoxou, CEO of Orthodoxou Aviation Ltd said: "We strongly believe that this collaboration will be very important for the Cyprus economy. Further to the business relationships that have been developed the last 2 years with the neighboring country, we expect that Arkia Airlines will play an important role in these relations to be further strengthened. Through this collaboration Arkia will be an additional option for passengers to travel from Larnaca to Tel Aviv for recreational and professional reasons".

Mr. Ezer Shafir, Vice President Commercial of Arkia Airlines said: "It is with great pleasure that we announce today the launch of our cooperation with Orthodoxou Aviation Ltd. This collaboration comes at a very important juncture, as relations between the two countries are much stronger at all levels. Our goal through this collaboration is to increase the tourist traffic to and from Israel while contributing from our side to the further development of business relations between the two countries. Of course, the above objectives will be implemented through the provision of quality services to our customers ".