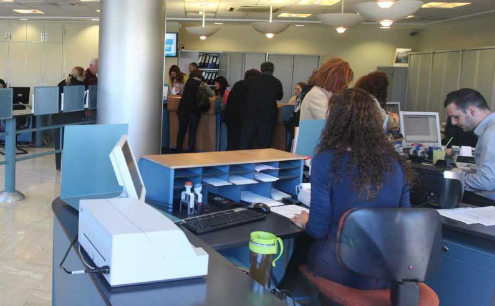 Bank of Cyprus (BoC) is looking to cut its staff by 2,500 and radically reduce its branches across the island, as it adjusts to the new reality imposed by the conditions of the island’s €10billion bailout deal.

Following an agreement with the employee union (ETYK) providing for salary cuts of up to 30 per cent, BoC was now focusing on striking a deal on voluntary retirements and restructuring the stricken lender. “I hope that soon we will come to an agreement with ETYK for the voluntary exit of a significant number of staff,” interim chairman Sophocles Michaelides said. He said the immediate goal was for 1,000 people to go and another 1,000 to 1,500 after the restructuring plan was finished. “In total we may cut staff by 2,000 to 2,500 by December,” he said.

To secure the much-needed assistance from its EU partners and the International Monetary Fund, Cyprus agreed to close its second-biggest bank, Laiki, and impose heavy losses on depositors to recapitalise BoC. Deposits over €100,000 have so far been cut by 37.5 per cent with the rate likely to reach 60 per cent. Depositors will receive equity in return. The bailout provided that part of Laiki’s assets would be transferred to BoC, as well as its personnel.

Following the absorption of Laiki’s 85 branches and 2,390 staff, BoC now has 202 branches and 5,640 staff. Michaelides said he expected more than half the branches to be closed by December. “We will focus on 100 to 120 branches across the island,” he told state radio. The BoC also exited Greece – as per bailout agreement — a market in which it operated for the last 22 years, through the disposal of loans, fixed assets and deposits of its banking operations in the country. Its operations in Romania and the UK have also been affected. In Romania, the bank transferred certain assets and liabilities including most customer deposits, certain loan agreements and related collateral, cash and other liquid assets to the subsidiary of Laiki in Romania. In the UK, deposits of Laiki’s UK branch have been transferred to BoC’s UK subsidiary and advances to the parent company.