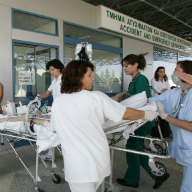 Health minister Philipos Patsalis recently said that a draft bill on the restructuring and autonomy of public hospitals in Cyprus will be tabled before parliament within June 2015.

The government’s aim is to have autonomous hospitals operating as of January 1, 2016.

On the controversial national health plan’s implementation, Patsalis said talks with doctors, nursing staff and other health officials and their unions are on going.