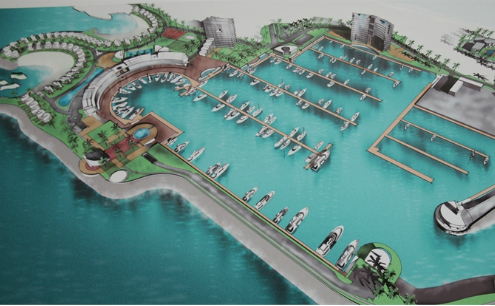 Seven leading construction companies have submitted their bids as plans for building an Ayia Napa marina are entering their final stage.

The company M. M. Makronisos Marina Ltd is in charge of the project, with Egyptian billionaire Naguib Sawiris participating in the ownership.

The company has received offers from seven bids for the construction of the marina, with costs estimated in the tens of millions of euros. M. M. Makronisos Marina is currently evaluating the proposals and is expected to begin construction in the second half of 2016.

The consortia and companies that submitted offers are:

The Italian company Salini Impregilo is one of the country’s largest construction groups that also works internationally. The Milan-based company, founded in 1958, also offers engineering services. After a series of mergers and acquisitions the group became a protagonist in the Italian economy, employing over 34,000 people and a turnover of over €4 billion. The group’s international projects are usually large-scale.

The Greek group Terna is a collaboration of the companies GEK and Terna. The group numbers beyond 3,000 people as personnel with a turnover of around €2 billion.

Belgian BESIX is one of the country’s most important construction companies with a history since 1909, personnel numbering over 18,000 people, and a turnover of €2 billion. J&P is also participating in the BESIX consortia for the construction of the Ayia Napa marina. J&P was founded in 1941 by Gogos Paraskevaidis and Stelios Ioannou. The group has an important presence in Cyprus, Greece, the Middle East and North Africa, employs over 13,000 and has an annual turnover of €600 million.

The Russian company JSC Mezhregiontruboprovodstroy, based in Moscow specialises in underwater infrastructure projects. Christos Poullaides’ company participates in the consortia. Poullaides Construction Company (Cyprus) was founded in 2002 in Bahrain where its projects number in the dozens, including commercial buildings, house buildings, fuel stations, closed football fields and factories.

The Greek company Aktor is the construction branch of the Ellaktor Group, owned by the Bobolas family. Aktor is one of the largest construction groups in Greece, with a turnover of over €1 billion and a presence in over 17 countries. Aktor was founded in Greece in 1950.

The Italian group Impresa Pietro Cidonio specialises in water works, but also in engineering projects for land and underwater. Piacentini Costruzioni also participates in the consortium which deals with the construction of large works such as bridges, road works, ports, marinas, airports and multi-purpose buildings. The group has constructed works outside of Italy, in the Middle East, North Africa, Latin America, and Asia. The Cypriot company Cybarco is also part of the consortium. The Lanitis-owned company has seventy years in the field of construction, with the Limassol marina and the under-construction The Oval in Limassol being among the company’s recent works.