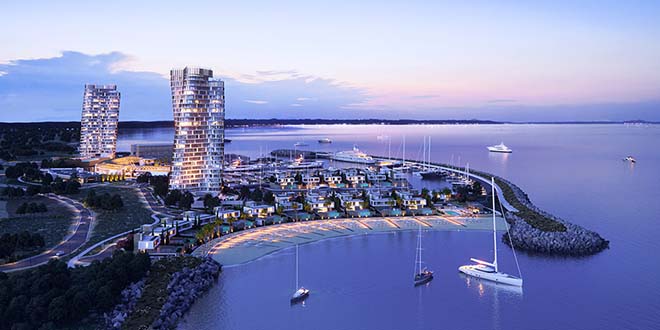 Construction of €300m Ayia Napa Marina is on schedule, as phase one of the largest foreign investment in Cyprus is nearing completion, the developer has announced.

Makronisos Marina Ltd, the developer of the marina, said that works on the emblematic project are moving along with a steady pace.

The company said that once completed, “the project will promote growth and highlight the dynamics of Cypriot entrepreneurship and contribute to Cyprus’ attractiveness as a tourist destination”.

The first phase of the project, which concerns infrastructure and berthing. In particular, the geotechnical works have been completed, while work on the south breakwater, one kilometre out is picking up speed.

Progress in geotechnical works and the breakwater has allowed construction teams to proceed with the road network of the project and the construction of the main buildings and the marina's management offices.

Progress has also been made in the ship maintenance building, which will play a key role in the operation of the marina.

Works on the second phase of the project, which includes housing and commercial properties, is also progressing to schedule, while the foundation for the East Tower has been laid.

Makronisos Marina managing director, Stavros Caramondanis said: "The completion schedule for the construction of Ayia Napa Marina is rigorously followed and soon the project will be a major attraction for marine tourism in the Eastern Mediterranean.”

He added: “Already 85% of the East Tower has been sold. Ayia Napa Marina, upon operation, will upgrade Cyprus as a destination of quality tourism all year round. This magnificent project is the largest foreign investment in Cyprus, with international reputation and interest from buyers and investors from different countries".

Located between the beaches of Ayia Thekla and Makronissos, Ayia Napa Marina will offer 190 spacious luxury apartments in two impressive towers, 29 luxury villas, a marina with significant mooring capacity and world-class facilities for 600 yachts, a shipyard, and a series of shops, cafes and restaurants offering services and amenities for those living in, and visiting, the marina.

The project, developed by ΜΜ Makronisos Marina and contracted to Terna AE of Greece, is said to employ 800 people during the construction phase, while a further 200 people are to be hired for its operation.

The Bloomberg Billionaires Index said that wealthy Egyptian brothers Nassef and Naguib Sawiris are among the richest 500 people in the world, coming in at 208 and 344, respectively.

Nassef Sawiris’ net worth amounted to around $7.4 billion, up $1.04 billion, while Naguib’s net worth stood at almost $5.13 billion in the sectors of telecom and media, down $121 million.