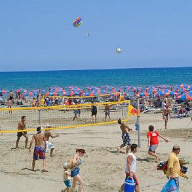 Karousos told the Cyprus News Agency that he would be having meetings with all of the major Russian operators. There was some concern over how the fall in the value of the rouble might affect this year’s influx of Russian tourists, he said. “Many hotel owners in Ayia Napa and Protaras have submitted several tempting offers to the Russian tour operators and we expect to receive some answers,” said Karousos.

Asked whether the crisis in Crimea was expected to affect the arrival of tourists from Russia to Cyprus, Karousos said the Russian market would not be affected by the situation in Ukraine, only by the devaluation of the Russian currency. “It is expected that tourists from Ukraine will be lost for this year. Around 45,000 people from Ukraine visit Cyprus every year and the majority of them holidayed in Ayia Napa and Protaras,” said the mayor. “We expect that due to the crisis, the arrival of tourists from Ukraine will be a minimum.” Over 600,000 Russians visited Cyprus last year and hopes were high for a significant increase this year given that flights were recently liberalised.