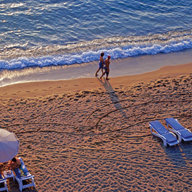 Ayia Napa mayor Yiannis Karousos is confident that direct flights to Larnaca Airport from the Russian regions of Ivanovo and Vladimir will help boost tourism business in the popular summer resort.

Karousos – who had been visiting the Ivanovo Oblast in Russia recently – met with Ivanovo Mayor Alexei Khokhlov during which time the two men discussed various ways to mutually benefit business in their respective communities.

According to an announcement by the Ayia Napa municipality, Khokhlov had told Karousos that his city “would soon begin direct flights to Larnaca Airport”.

The Ayia Napa mayor also met with Vladimir mayor Olga Deeva during which the two also spoke of ways of expanding cooperation. Vladimir is a city situated in the Vladimir region east of Moscow, close to Ivanovo.

Karousos had flown out to the region to celebrate the 145th anniversary of Ivanovo’s founding. The Ayia Napa Municipality had twinned with the Russian city of Ivanovo in 2014.

The Ivanovo Oblast [administrative district] has a population of just over one million residents with its three largest cities being Ivanovo (the administrative centre), Kineshma, and Shuya.

Earlier this year, Karousos had predicted a good summer for Ayia Napa as tourist numbers continue to climb.