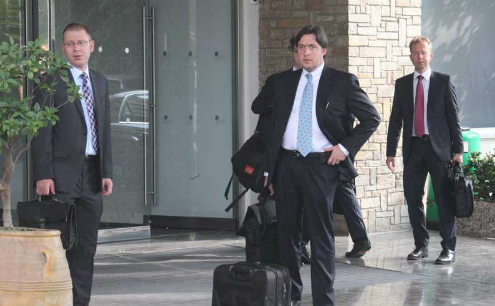 The restructuring of Cypriot banks, fiscal discipline and a lower-than-anticipated contraction of GDP may have somewhat improved the country’s economic outlook, but the main underlying challenges to a full recovery remain, say the troika.

That was the gist of a briefing given by the heads of the troika delegation to the House finance committee recently. Speaking to newsmen after the meeting – held behind closed doors at the troika’s request – MPs said the pending third assessment of Cyprus’ economic adjustment programme is expected to be positive. Cyprus’ international creditors – the International Monetary Fund, European Central Bank and European Commission – now calculate a less severe recession than initially projected, ruling DISY MP Prodromos Prodromou said.

For 2014, GDP is expected to contract by around 4.7%, compared to previous projections of 6 to 8%. And in 2015 the economy may register an up to 1% growth. But at the same time the European Commission’s Maarten Verwey again conveyed the lenders’ concerns over the size of private debt and of delinquent loans, a permanent danger looming over the banks. The EU official called for the creation of a debt management system to recover as much debt as possible but that would also ensure genuinely viable businesses do not go under.

In January, EU and IMF experts warned that restructuring of loans by Cypriot banks was an “absolutely critical component” to the success of Cyprus’ bailout programme. They revealed that €19bn (120% of GDP) was currently owed to the banks in non-performing loans (NPLs). The amount of NPLs currently stood at 46% of the banks’ gross portfolio. Likewise data released by the Central Bank this week showed that 40.2% of loans to businesses are classed as non-performing. At the end of September 2013, there were some €33bn in loans outstanding to businesses, of which €13.3bn (slightly short of Cyprus’ entire economic output) were deemed delinquent.

In absolute terms the construction industry (developers) was the worst performer, with 61.9% of the loans taken out (or €4.4bn) considered delinquent. In the retail and wholesale sector, NPLs accounted for 36.6% of loans, and for 52% (or €1.2bn) of loans in the accommodation and lodgings business (hotels). In addition to the high level of indebtedness, households and businesses alike have been starved of cash following the forced deleveraging of Cypriot banks and the imposition of capital controls after the ‘haircut’ on uninsured deposits in March last year.

The credit squeeze, which precludes new investment, is the economy’s other major sore point. Politicians here have been calling for a drastic easing – or even the outright lifting – of capital controls, but it’s understood the troika want to proceed more cautiously. AKEL MP Pambos Papageorgiou called out the troika on this: “For the past year lack of credit has been the single most serious problem for the economy, yet there has been no change in policy,” he told reporters. “There are about 30 businessmen who have borrowed – never to repay – six billion euros, and meanwhile those who lent them the money, the banks, don’t seem bothered in the least,” said Papageorgiou. As long as this issue remained unresolved, he added, there was no way for the economy to rebound.

During the same meeting with lawmakers, the troika once again made it clear that the privatisation of certain semi-state enterprises – a move expected to raise €1.4bn in government revenues by 2018 – is a must. However the troika realises that privatisations are a politically sensitive subject, the European Commission’s Verwey reportedly told politicians. Verwey said also that there is no fixed model for privatising semi-state enterprises. Each of the enterprises concerned would be dealt with according to their balance sheet and their type of operations. Also, troika technocrats held successive meetings at the Directorate General for European Programmes, Coordination and Development (formerly the Planning Bureau) with stakeholders in the merchant shipping business and with the Cyprus Investment Promotion Agency.