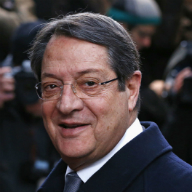 Cyprus was the fourth euro area member state to exit its bailout following Ireland, Spain and Portugal. The island used €7.25bn of the total €10bn earmarked in the bailout.