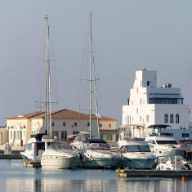 A non-profit initiative, a window to the local music scene and to the beautiful town of Limassol, BalconyTV has now launched in Cyprus.

The leading daily online viral music show features up and coming or established artists performing on balconies around the world (balconytv.com). Filmed in cooperation with Soundscape Studios (soundscape-studios.com), BalconyTV Cyprus takes place on Limassol Marina’s Harbour Master terrace in the heart of the €350 million development. It gives bands, solo artists and musical acts the opportunity to perform their original songs and gain exposure on a worldwide platform by promoting their music through a successful brand.

BalconyTV was conceptualised in June 2006 when three Dublin friends began filming bands on their apartment balcony. Today, it is produced in more than 40 cities around the world and features over 8,000 videos which have now been viewed 40 million times. Some artists who have performed on BalconyTV include Mumford and Sons, The Script, Kimbra, The Temper Trap, Ed Sheeran and Jessie J.

Speaking of the Cyprus launch, its host Sophia Paraskeva, Marketing and PR Executive of Limassol Marina said “The Producers of BalconyTV Cyprus are talented artists themselves, with a passion for music and a genuine desire to help promote local singer songwriters. To be able to offer this fantastic opportunity from the balcony of Limassol Marina is hugely gratifying. The atmosphere here is unrivalled. It represents everything that is fresh, ambitious and thriving about our local community. It reflects the very essence of BalconyTV and we are extremely proud to be involved.”

BalconyTV Cyprus is produced by Darren Casey and Chris Charalambides who both agree, “showcasing the Cyprus talent to the world will give artists the confidence to pursue their dream. Many of us grew up with the talent, the band, the material but no platform for exposure, no location for a gig and no professional team to film our live performance. Now is that chance!”