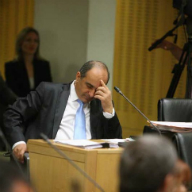 Bank transfers prior to bail-out made public

A list with the names of companies that transferred money abroad during a bank lockdown in March 2013 was recently made public by Parliament.

The list was revealed as parliament discussed the Ethics Committee’s report of its 18-month probe into the causes of the island’s economic catastrophe.

The lengthy debate was marked by the publication of the list of transfers abroad during the lockdown following a decision to seize deposits to recapitalise lenders. The list, which also included inflows, was made public by committee chairman Demetris Syllouris.

It concerns transactions carried out by the Bank of Cyprus (BoC) and Laiki between March 20 and 22 and March 19 and 31 respectively. The transactions during that time had to be approved by the Central Bank.

Banks remained shut between March 15 and March 28 after the Eurogroup decided to seize part of deposits in all banks in Cyprus to recapitalise Laiki and BoC.

This was rejected by parliament and on March 25, the Eurogroup decided to resolve Laiki and seize uninsured deposits in BoC to recapitalise the lender.

Syllouris published the list despite an agreement last week to give the Central Bank until June to process the names and check for irregularities.

The largest outflows recorded where from fuel companies and JCC payments, a card-processing company, 75% owned by BoC and the rest by Hellenic Bank, National Bank of Greece, Piraeus Bank, and Alpha Bank.

Publication of the list is expected to cause controversy as one person named has already denied transferring cash abroad. In fact, the businessman said, the amounts concerned one deposit and two payments made locally.

Responding to the publication, the Central Bank ‘emphatically’ pointed it had submitted the data to help the committee in its probe into the causes of the economic collapse.

Summing up the probe’s report, Syllouris blamed the former Central Bank governors and the officials of the Demetris Christofias administration whose “bad and criminal actions” led to Cyprus’ economic collapse.

DISY leader Averof Neophytou called on all parties to unite in the effort to rebuild a stable economy with sound foundations. He also asked everyone to reflect on their own mistakes, which eventually led to the collapse.

Neophytou said the crisis should be seen as an opportunity to make the necessary changes, which were being constantly postponed “to avoid the political cost. Neither I nor my party are without sin. To satisfy demands and transfer the problems onto the next administration was one of the main characteristics that brought us here,” the DISY chief said.

Neophytou said the problem with the economy was the Cypriot mentality – households, businesses, and the state – that learned to live off borrowed money, creating an artificial prosperity.

Main opposition AKEL leader Andros Kyprianou reiterated that the collapse was mainly the fault of the banks. AKEL’s administration is considered responsible by the majority of Cypriots for the collapse of the economy.

Kyprianou said there were problems with the state’s finances during the previous government but efforts were being made to correct them. “In any case, public finances could be kept in check and they were not a reason toresort to the support mechanism,” he said. “What forced us to resort to the support mechanism was the huge hole in the banking sector. A hole that I think was deliberately inflated by our European partners so that they could impose their decisions, which were painful for the Cypriot people.”

However, he said, other expediencies prevailed, and not everyone was able to see the truth. The expediencies dictated undermining Christofias and AKEL and removing them from power. “Unfortunately this is what prevailed at the time. Above national interests,” Kyprianou said.

DIKO chairman Nicolas Papadopoulos demanded the punishment of those who led the economy to collapse as well as a review of any potential gaps in the banking and political systems. However, Papadopoulos said, the catastrophe could have been avoided.  “In the case of Cyprus, it was not only the banking system that failed, but also the political system,” he said.