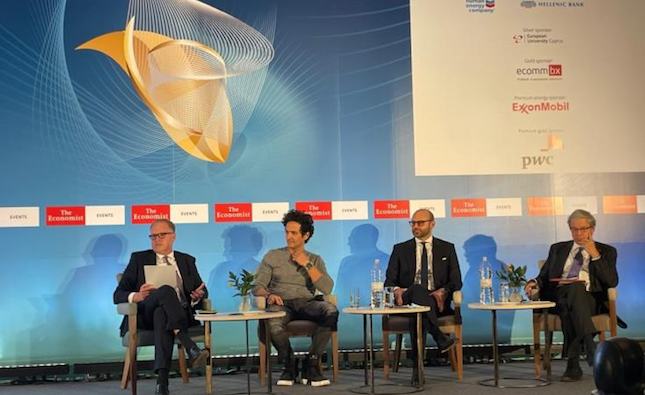 The digitisation of banking services is ‘not an option, but an urgent need’, the Hellenic Bank CEO Oliver Gatzke said on Monday at The Economist’s annual Cyprus Summit in Nicosia.

The Hellenic Bank CEO added that the banking sector in Cyprus could not afford to be left behind by global developments. Gatzke was participating in a panel discussion centred around the financial sector’s new normal and what that might look like.

The panel discussion touched on the post-covid challenges for the Cypriot banking system, the fintech revolution and its impact on conventional banks, as well as the digital transformation of the financial services industry.

Gatzke also spoke about the significant shift towards digital and alternative channels across the financial and banking sector over the past two years.

“This is very encouraging, but we still have a long way to go in terms of our goal of automating and simplifying processes to offer global services and competitive products,” he said.

New roles were being created in the industry and banks needed a long-term sustainable business model in order to survive in a highly competitive environment, with a large number of banks currently operating under strict regulatory requirements, he said.

The European Green Deal was just a first step and a roadmap towards a more sustainable future, said Gatzke, noting that the investment initiatives coming from the EU exceeded the public sector’s capacity.

He added that the banking sector must integrate a number of environmental, social and governance pillars into its decision-making process in order to promote sustainable financing and allocate capital towards sustainable and transitional assets.

Finance Minister Constantinos Petrides took part in a panel discussion with European Stability Mechanism (ESM) chief Klaus Regling and PwC CEO Evgenios Evgeniou, that examined the issue of Next Generation EU funds, post-covid reforms, opportunities for Cyprus and the European Union, as well as the perspective of private businesses.

He said that while Cyprus was one of the eurozone countries where pandemic-induced fiscal losses were recovered during 2021, there were still challenges ahead.

“There are many challenges and in the economy, nothing should be taken for granted,” Petrides said. “We should protect public finances, and that is one of the government’s main objectives, which allows us to prepare for the next crisis -we do not know when it will come but it will.”

On Cyprus’ Recovery and Resilience Plan, Petrides said that it will be used to further strengthen the country’s growth model, saying that its recently implemented diversification facilitated a less pronounced recession in 2020.

Regling was on the same wavelength but looked at the EU-wide context, stressing that reform pledges must be adhered to.

“If countries successfully implement the reforms that they proposed in their Recovery and Resilience Plans, they could sustainably raise their growth potential and transform their economies,” he said.

“Going forward, the efficient and effective implementation of these plans is the key task for all EU Member States over the next five years and Cyprus is no exception,” Regling added.

The ESM chief also spoke on the issue of public debt which increased as countries tried to counter the effects of the pandemic.

“Public debt is currently sustainable in all member states of the monetary union,” he said, adding that countries now have a higher debt carrying capacity than was agreed in the Maastricht Treaty.

The Maastricht Treaty, signed in 1992, used a formula to calculate a maximum debt ceiling of 60 per cent of GDP.

Regling explained that certain elements of the Stability and Growth Pact, as they stand now, do not reflect the conditions of the new macroeconomic environment.

“Going forward, a simplified EU fiscal framework could be built around a 3 per cent deficit limit and a higher debt-to-GDP ratio,” Regling said.

The ESM chief also referred to Petrides’ comment on a future fiscal crisis being unavoidable and coming without warning. “We know there will be a crisis one day, we don’t know when, we don’t know where it will come from,” he said.

“We did not know, two and a half years ago, there will be a pandemic with such a high cost, so we don’t know when and what but it will happen, so fiscal space is an important element when we look at an efficient management of fiscal policy,” Regling added.

“We have already laid the foundations for achieving sustainable economic, environmental and social growth, as evidenced by the European Commission’s forecasts for the current year, which acknowledge the strong recovery of the economy, with growth rates higher than the European Union average,” the president said.