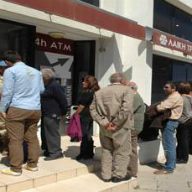 Commercial banks have restructured €12 billion of non-performing loans as of April 2014, or 27% of the amount borrowed in Cyprus totalling €44 billion, according to the bank association.

Loans to the construction sector – the single largest loan group with €7.2 billion, of which €5 billion were non-performing – were restructured to the tune of €3 billion, or 43% of total loans.

The €5 billion figure, the association said, includes restructured loans that remain classified as non-performing in accordance with the new definition applied by the Central Bank of Cyprus (CBC).

Housing loans that have required restructuring were a fraction of construction loans.

Of a total €5.8 in housing loans, €2 billion have been classified as non-performing, including those restructured but still listed as such.

“These figures suggest that a significant number of loans has been restructured, despite part of them still being listed as non-performing due to the CBC’s definition,” association head Michalis Kammas and deputy Michalis Kronidis noted in an article. “Therefore, what is required is patience, calm, further strengthening of the cooperation between banks and borrowers and combating strategic defaults.

Despite the difficulties, financial or other, banks have responded to the challenges and proceed with loan restructurings when borrowers are viable and cooperative.”

Kammas and Kronidis argued a further point, suggesting that restructuring procedures by Cypriot banks are carried out much quicker than other bailed-out countries.

According to the bank association reps, in Ireland the framework for arrears management was issued by the Irish Central Bank in July 2013, two and a half years after the country applied for financial assistance, while Greece issued one in June 2014 – four years after it was bailed out.

In contrast, compared to these countries, the CBC issued the directive in September 2013 with immediate effect, just five months after the country applied for financial aid and signed a memorandum of understanding.

“Over the last eight months, banks have undertaken a struggle of studying, analysing, organising, implementing and adopting the CBC’s arrears management directive,” Kammas and Kronidis said.