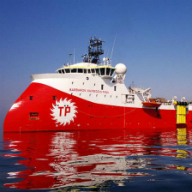 Barbaros, the Turkish vessel which carried out exploration activities for hydrocarbons in Cyprus’ EEZ since 20 October 2014, sales off Eastern Mediterranean on the 30 December, Turkish media reports.

According to reports, Turkish Cypriot negotiator Ergun Olgun, confirmed the reports and said that it was about time to resume solution negotiations. He also called upon the Greek Cypriot side to return to the negotiating table without preconditions.

Mr Olgun argued that the Greek Cypriots do not want to share the island resources and pointed out that bringing hydrocarbons on the table could be a catalyst in solving the Cyprus problem.

A new process to solve the political problem started last February. Negotiations were stalled last September, when Turkey announce that Barbaros would carry out exploration works in Cyprus’ EEZ.