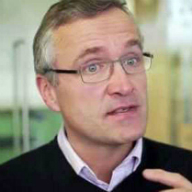 The Hellenic Bank board of directors has appointed Bert Pijls as the bank’s new CEO, the third person to manage the bank in as many months.

The new CEO replaces interim CEO Marinos Yannopoulos, who was appointed in September after taking over from Makis Keravnos who had been in that seat for a decade. Yannopoulos remains as a non-executive member of the board.
The bank’s chairperson, Irena Georgiadou, said that Pijls was the best choice for Hellenic.

“With his extended experience in banking across six countries and his recent specialisation in the use of digital channels to enhance customer service, he is ideally placed to ensure the implementation of our strategic plan and seize the considerable opportunity before us to be established as a solid banking alternative for Cypriot households and businesses.”

A Dutch national, Pijls was most recently Managing Director of Customer Services and Commercial at British Gas/Centrica, “where he had a strong focus on increasing the company’s use of digital channels,” the bank statement said.

He was previously Managing Director at Citigroup EMEA in London, deputising to the CEO and had the responsibility for re-engineering operations to improve expense-to-revenue ratios. Pijls has held positions in the financial services sector in the US, Germany and Belgium, primarily with Citigroup and American Express.

Commenting on his appointment, Pijls said that it “is an honour to be asked to lead Hellenic Bank as it moves beyond the recent comprehensive assessment and looks to deploy its resources to support the green shoots which are starting to re-emerge in the Cypriot economy. I am joining a bank in sound financial health, with supportive shareholders and a committed team and in a unique position as the credible challenger to the established order in Cypriot banking.”

Pijls’ appointment is subject to Central Bank approval. A week ago, Hellenic Bank proceeded with increasing its share capital by €220m to cover a shortfall derived from the EU-wide ‘stress test’ of about 130 banks earlier in October.