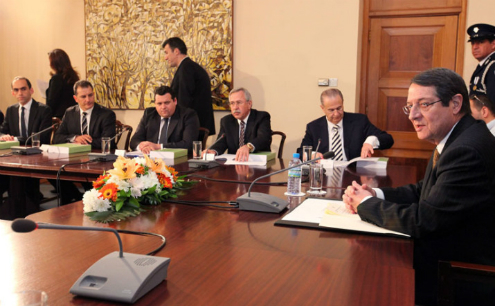 The Cyprus cabinet has approved a bill to define the criminal responsibility for the way government ministers act or fail to act during terms in office.

The bill aims to increase the responsibility and accountability of ministers as well as other state officials who do not hold a minister’s portfolio, says the deputy government spokesman. Victoras Papadopoulos said ministers would have specific responsibilities relevant to their portfolio, but also collective responsibility as members of the cabinet relating to specific criminal offences in connection with violating the constitution’s provisions, the government’s body of laws or state interests.

Cabinet has also approved a similar bill for the auditor-general, the deputy auditor-general, the Central Bank (CB) governor and the deputy CB governor. The latter post is reserved in the constitution for Turkish Cypriots and had been vacant for decades before the previous administration appointed a senior CB official about two weeks before presidential elections. President Nicos Anastasiades rescinded the post about a month after winning elections on the grounds the reasons evoked to bypass the constitution were non-existent.

The constitution protects the President and members of parliament from criminal prosecution, but not Cabinet ministers. President Nicos Anastasiades said in April, soon after an international bailout that left many jaded and angry at the years of mismanagement, that he would broaden the offences under which a president could be prosecuted and would be lifting lawmakers’ immunity entirely. So far he has not seen those promises through.

The cabinet has also agreed to push a law amendment allowing promotions in the civil service as long as they did not result in additional expenses. Title promotions will be allowed but will be teased apart from pay promotions as long as wage freezes apply, Papadopoulos said.

Specific departments within the public service have been asking for a way to uphold hierarchical structures as senior officials have been retiring, leaving departments to deal with acting heads, often on a rotation basis. Cabinet has authorised the labour minister to consult with legal services for any necessary actions in the national guard, police, the education sector and in relation to senior positions, Papadopoulos said.

The bills will need to pass through parliament.

The Cabinet also endorsed the labour minister’s suggestion to begin a dialogue with private sector stakeholders with a view to agreeing on a two-year emergency plan vis–à–vis the debt crisis. An array of issues will be discussed including overtime, holiday, and shift allowances, wage increases and cost-of-living allowances, end-of-year and Easter bonuses, restructuring working hours, part-time employment, wages for newcomers, and pension funds.

Also to be discussed will be allowances given in local authorities and semi-governmental organisations, employers’ contributions to various funds, measures to support employment and/or avoid redundancies, employing Cypriots, and tacking illegal and undeclared employment.

Pay increases and new hires in the civil sector were frozen last year as authorities tried to rein in the state’s payroll. Because civil servants would get bumped up just before retirement to maximise their pension and their one-off bonus, a promotions’ freeze was also put in place.