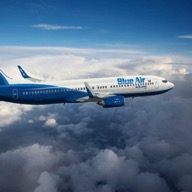 Its website recently advertised the flight at ₤24.99 (€33.86), one-way and including taxes but for a limited amount of seats.

The carrier is also adding several other new UK routes for summer 2016 including services to the Romanian capital Bucharest from Birmingham, which starts on March 29, Luton to Turin from March 27 and Liverpool to Cluj in north-west Romania from June 3.

Blue Air started flights between Glasgow and Bucharest on December 17, 2015, which operate twice a week.