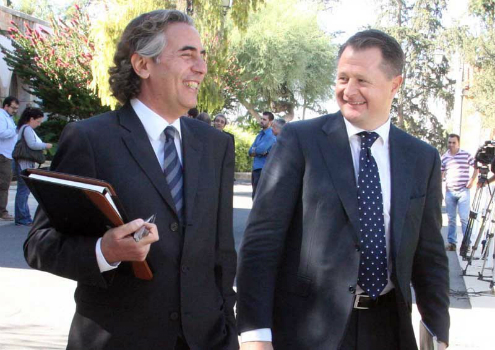 Bank of Cyprus (BoC) top brass appeared optimistic about the lender’s future, although non-performing loans are a key challenge that has to be addressed before confidence in the sector will be restored.

“BoC already had a CEO, we have closed our accounts for 2012 and in 15 days we are closing our six-month accounts,” BoC chairman Christis Hassapis said after the board met President Nicos Anastasiades. The lender has prepared a restructuring plan, “the bible” of how BoC will operate in the next five years, “thus we think we are doing well. Bank of Cyprus will support the Cypriot economy,” Hassapis said. The bank reported record losses of €2.3 billion for 2012 on a surge in non-performing loans as a crippling recession impacted people’s ability to repay debts.

John Hourican, a former RBS senior executive appointed CEO of Bank of Cyprus last week, said the issue of non-performing loans was among the most pressing issues at the bank. “This is an unprecedented situation that has happened to Cyprus and to the Bank of Cyprus and I think that, while the problems are actually quite clear, the solutions are as of yet untested, and not clear to me given that I haven’t yet taken full possession of the job,” Hourican said. “I wouldn’t have taken the job if I didn’t think we can make a difference and I look forward to engaging with all of you and with the lawmakers and everyone in Cyprus over the course of the coming years, I will be moving here and I look forward to moving to Cyprus and trying to make a difference not just for the Bank but also for the country,” Hourican said.