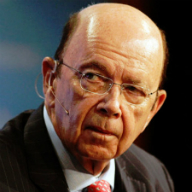 Billionaire investor Wilbur L. Ross, Jr., who pumped about €400m into Bank of Cyprus in August 2014 and now controls 19% of the island’s biggest lender, is confident that the bank will continue on its recovery path and as it continues to be restructured, it can gaze forward with a view to 'Bank of Cyprus, 2020'.

In an interview with the Financial Mirror, Ross said that the foreclosures framework will help the bank “to engage effectively with borrowers and to manage down the high level of problem loans, especially the larger ones and strategic defaulters.”

However, he was also reassuring that the new “framework does not necessarily also entail that the weakest segments of society will be left unprotected. This was never our intention.”
Ross explained that past efforts were focused on deleveraging the bank’s overseas non-core assets and that the insurance operations (Gereal Insurance, EiroLife and 50%-owned CNP Laiki) remain strong and “we are not in any way seeking to minimise their role in the Group.”

He said that a small miracle occurred, largely unnoticed, in the reduction of ELA dependence, which is why he is convinced that the BOCY is a “comparably good investment” in his portfolio, which he places on par with his recent successes with Bank of Ireland and Virgin Money.

Looking ahead, Wilbur Ross believes that Cyprus is poised to emerge further if brave political decisions are taken, which is why the country needs to look beyond oil and gas, by boosting tourism and aviation, and focusing on new jurisdictions such as Asia by reducing the reliance on eastern Europe.

Q. The recent results announced for 2014 were a bit disappointing, but also indicated that the bank is struggling to bring in new sources of revenue. Is the biggest problem impeding the bank's recovery the delay in passing the foreclosures package?
I would not say that the results are disappointing. To the contrary, they show that the bank is progressing at a good pace regarding its Recovery Plan. Of course, the on going recession puts a damper on new lending, but we are now in a position to say that Bank of Cyprus has reached a point where instead of focusing primarily on managing the fallout from the events of March 2013, it can focus ahead to its next steps. Apart from all the metrics that demonstrate good recovery of confidence – like deposits’ behaviour - the results also show that we are fast normalising our funding structure. A small miracle occurred, largely unnoticed, in the reduction of ELA dependence as well.

Concerning new sources of revenue, it would be important to note that the Group's recurring profitability is stabilising and profit before provisions totalled €745 million, up almost 28% from last year. We had been looking forward to the completion of parliamentary discussion and the finalisation of the foreclosures legislation, which will now allow us to engage effectively with borrowers and to manage down the high level of problem loans, especially the larger ones and strategic defaulters.

A solid legal framework, with clarity of rules and predictable and timely legal results, is necessary for the functioning of any banking system. I will point out, however, that a solid foreclosures framework does not necessarily also entail that the weakest segments of society will be left unprotected. This was never our intention.

Q. SMEs are still not getting necessary funding to restart their businesses, as many ‘mum-and-pop shops’ are already overly exposed with collateral. But surely, if this sector does not get access to fresh funding, how do we expect them to revive their businesses and restart paying their loans?
Demand for credit from creditworthy businesses remains low, and this is natural under the current conditions in the Cypriot economy. On our part, we have introduced a series of programmes specifically addressed to SMEs and we have already approved some €84 million in SME lending through EIB supported programmes. Beyond the ‘Jeremie’ programmes, which are addressed primarily to micro and small businesses, we are also running a series of EIB loans geared towards larger corporations. Last week, we announced a new €60 million programme that caters to the ‘middle area’ of SMEs, in collaboration with the Cyprus Entrepreneurship Fund. With this programme, we can now cover all SMEs irrespective of their size.

We are also engaging actively with many customers to find workable solutions to address their borrowing needs through the introduction of viable and sustainable restructuring solutions.

Q. With the crisis in Russia and Ukraine, business in Cyprus could be affected (services, tourism, agriculture). Are you confident that BOCY will be able to recover, even if such short-medium term or seasonal obstacles remain?
The Russian and Ukrainian economic slowdown does present a significant challenge for the domestic economy and hence the banking sector. Some segments of agriculture have been affected by sanctions imposed by Russia, while tourism appears to be vulnerable to the Russian crisis. We expect this to be offset by more U.K. tourists because of the strength of the pound relative to the euro. The situation, however, remains manageable and the pressure put on the economy and the banks is not as large as was feared. Cyprus has been unlucky in the timing of developments in Russia, which are coming about just at the time when the economy was testing the bottom of the crisis and was about to enter into positive territory regarding GDP growth. The silver lining in this, of course, is that the crisis developed as Bank of Cyprus and the country overall managed to recover much of the confidence lost because of the political decisions of March 2013. This shielded us from the nightmare scenario and I can say that we are well beyond that now.

Cyprus cannot be complacent, however. Efforts to replace the reduction of demand from Russia must continue. Furthermore, over the medium term we should plan to reduce the reliance on Russia for tourism and services activities and expand in other jurisdictions so as to create a more diversified and sustainable economic activity in the country.

Q. What is the ‘ranking’ of your BOCY investment within your general investment portfolio? Is it medium-to-long term? Is it a ‘promising’ investment?
Bank of Cyprus is a very promising investment. As I said earlier, a small miracle happened within the bank and it went largely unnoticed. Twelve months ago, the main concern was whether the bank would continue to exist. We are now able to gaze forward, to plan future moves and to engage in reforming certain aspects of the bank with a view to ‘Bank of Cyprus, 2020’. We are continuing this work, boosting operational profits, increasing future operational capacity and slowly closing the chapter of 2013 with a rationalisation of our liabilities base and seeking new profit sources. This cannot happen overnight, but I’m confident that it will happen, based on the existing capacity inside the bank and the way we are progressing towards achieving targets. We believe that ultimately BOCY will be a comparably good investment to our recent successes with Bank of Ireland and Virgin Money.

Q. Do you see Cyprus as an ‘emerging’ market?
Cyprus is a troubled economy. It survived a tremendous shock and emerged successfully from the darkest of crises. Although its small size renders local capital markets somewhat weak, we can see from the fiscal side of the crisis that institutions in the country are robust and indeed in most cases, mature. The potential we see in the country is immense, through its know-how, impressive expertise and a good deal of institutional infrastructure. A lot remains to be done, even for a mature economy, but the crisis is creating immense potential through the displacements it forced on the economy, from easy sectors like real estate, to more complex business. Cyprus is in many ways a mature economy, and I would not call it an ‘emerging market’, but the country is certainly poised to ‘emerge’ further if brave political decisions are taken.

Q. What do you believe the new ‘game changer’ for Cyprus could be? Is it still energy and proximity to East Mediterranean oil and gas?
Energy will be an important sector going forward. The prospects of the energy sector are not limited to the possibility of local discoveries - indeed, they go much further than that. Cyprus can become an important energy hub for Europe, providing not only supplies westward, but also auxiliary support in the region. Such support services can be purely technical, or financial. This point should not be lost on us. At the same time, however, we need to look beyond oil and gas. There is impressive room for improvement in tourism (including air travel) as well as other services.

Just as Ireland is the western gateway to the European Union, Cyprus is its counterpart in the east, looking into fast growing markets that are not yet fully tapped by western business. We should focus on sourcing business from new jurisdictions such as Asia and reduce the reliance on jurisdictions in Eastern Europe. We also need to bring more tourists on the island, extending the tourism season and better utilising the tourism industry’s assets.

Q. Are you happy with the bank's non-core insurance businesses? Would you like to see the Laiki investments (CNP Insurance) let go?
The bank continues to deleverage, minimising its exposure to non-core operations and simultaneously boosting its core capacity and profitability. Overall, however, our insurance operations remain strong and we are not in any way seeking to minimise their role in the Group. The main aspects of the bank’s shedding of non-core operations, is abroad. We are becoming a more ‘Cypriot’ bank focusing inside the country and boosting the Cypriot economy rather than ‘exporting’ financial resources to various misadventures.