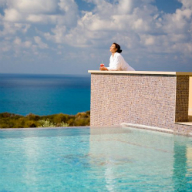 The Bank of Cyprus announced recently that the sale of Aphrodite Hills has been completed, following its approval by the Cyprus Commission for the Protection of Competition.

“Further to the agreement reached by the Bank of Cyprus for the sale of its equity stake in Aphrodite Holdings Ltd, the holding company of the Aphrodite Hills Resort, to a group of investors including Invel Real Estate Management Ltd and funds managed by York Capital Management, the Bank announces that the Commission for the Protection of Competition in Cyprus has declared the transaction compatible with the conditions of the competitive market” the Bank said in a press release.

It added that the agreement values the Company in excess of €90 million and according to its terms, the Bank will retain a 10% minority equity stake in the Company.

The Bank had acquired 75% of the Company’s equity stake from the previous majority shareholder in October 2014.

The Aphrodite Hills Resort is involved in the development and sale of residential property and the ownership and administration of a golf resort and a 290 room hotel.