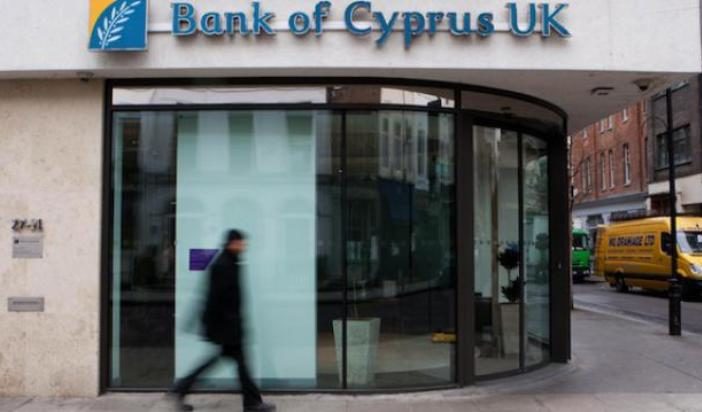 BOC to sell UK unit to Cynergy Capital for €117m

Bank of Cyprus, the island’s largest lender, said that it agreed to sell its subsidiary bank, Bank of Cyprus UK, and unit Bank of Cyprus Financial Services Ltd, to Cynergy Capital Limited, a UK-based group, for a total of GBP £103m (€116.6m).

The sale, subject to approval by Cypriot and British regulators, is expected to be completed by the end of the year, Bank of Cyprus said in an emailed statement on Tuesday. The agreed price is also subject to customary adjustments and payable in cash, half of which is deferred 24 months after the completion of the deal “without any performance conditions attached”.

“On completion, the total value of the sale is expected to have a positive impact of circa 65 basis points on the group’s CET1 (core equity tier 1) ratio and circa 60 basis points on the group’s total capital ratio,” the bank said. “The accounting profit from the sale is estimated at circa. €3m. The group will provide an update on the financial impact at completion”.

Bank of Cyprus, which sold most of its foreign non-core units since the 2013 banking crisis, including its loss-making unit Uniastrum three years ago, said that its decision to sell its UK unit amid uncertainty over the divorce negotiations between the UK and the European Union, was in line with the its “strategy of delivering value for shareholders and focusing principally on supporting the growing Cypriot economy”.

Cynergy Capital is expected to rebrand the acquired unit to Cynergy Bank and continue to service the Cypriot community in the UK, Bank of Cyprus said.

“This is another positive step in our journey back to strength,” the bank’s chief executive officer John Hourican was quoted as saying. “The transaction will further simplify the group and deliver good value to shareholders. The equity realised will be deployed in pursuit of our core activity in Cyprus to continue to support the recovery of the Cypriot economy”.

He added that the agreed transaction will allow the UK bank “to grow faster, thereby achieving the ambition for this business with new partners”.

Bank of Cyprus and Cynergy also agreed to sign a “cooperation agreement” to ensure continuity in servicing the bank’s existing customers.

“We are excited about the cooperation agreement which provides for a strong channel of connectivity post-Brexit and into the future, and will support group customer requirements for UK banking, as well as delivering commercial benefits for both organisations,” Hourican added.

The transaction will reduce the bank’s balance sheet by around €2bn, the bank said. at the end of March, the gross loans of the bank’s UK unit amounted to €1.8bn or 9% of the group’s total.

The lender added that the deal is expected to have a “negligible impact” on the income statement with the organic earnings per share guidance remaining unchanged at €0.40 for the year. “The group’s targets for the year and medium-term guidance remain unchanged and continue to exclude any impact from any possible accelerated risk-reduction transactions,” the bank said.

Cynergy’s CEO Nick Fahy said that the acquisition by Cynergy, which already has decades of experience in working with the members of the UK’s Cypriot community, will have a positive effect on the UK bank’s development.

“The sale to Cynergy will enable us to focus on growing our franchise across enterprising business owners and savers in the UK, including the underserved property and SME market,” he continued.

Bal Sohal, Cynergy’s director said that the company was actively looking to invest in the UK banking sector where it identified “significant opportunities for growth”.

“Cynergy’s focus will be on delivering sustainable growth for the UK bank,” Sohal continued. “We plan to support the existing management team to deliver on the strategy it has for the bank and are committed to investing further capital to develop the business in the coming years”.