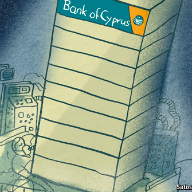 Bank of Cyprus’ real estate management unit (REMU), assigned to manage properties acquired by the bank as part of loan restructuring agreements, increased its stock with assets in Cyprus worth €689m in the first half of 2016, the bank said.

The lender’s REMU, whose operation was announced in March, is currently managing immovable assets worth €1.1bn and sold in the first half of the year assets worth €92m, the bank said. In June, properties worth €201m in the unit’s possession were located abroad, mainly in Greece.

Sources with knowledge of the situation said that the unit which contributed to the bank’s profit in January to June with €1m completed transactions after receiving inquiries from buyers already before it advertised the affected assets. The sources added that the lender is in advanced negotiations – mainly with local buyers – to sell additional assets worth €45m and the transactions are expected to be completed before the end of the year. The assets in this case include “land in a certain coastal area, high-value homes at the coastal areas, parcels of agricultural land of lower value, and plots in various areas”.

While the REMU, which was endowed on set-up with properties in Cyprus worth €336m, aims at disposing of its entire stock, it also set up an internal asset management unit to assist with properties failing to find a buyer.

The immovable asset division of Bank of Cyprus, which posted a net profit of €56m in the first six months of the year, had a “positive” experience with the prices at which it disposed its assets so far, the sources said.

According to the Central Bank of Cyprus, home prices are beginning to stabilise after starting to decline after 2008. In the first quarter of 2016, home prices dropped 0.8% compared to the previous quarter. The Cyprus division of the Royal Institute of Chartered Surveyors said in July that prices of both commercial and residential properties increased in January to March compared to October to December. Rents for properties in all categories except retail also increased, RICS said.

The Bank of Cyprus sources added that the lender, which set up its REMU in an attempt to reduce its stock of non-performing loans, at 59.3% of its entire loan portfolio at the end of June, receives properties as part of debt-to-asset-swaps “generally at the forced sale price” before it attempts to sell it at a market price for profit.

Customers do not benefit from the sale of the assets at a higher price than the agreed swap price, the sources said. “Both the downsides and the upsides are with us”.

Still, no borrower was left “dissatisfied” with such an agreement, the sources added.

In addition, Bank of Cyprus “remains sensitive” when it comes to primary homes, the said. “No customer who came to us was left without a home. There is a win-win for both”.

The sources said that among buyers there is a large portion of non-Cypriots, both individual and professional investors, adding that demand for hotel properties is boosted by the recent better-than-expected performance of Cyprus’s tourism industry. The possibility of acquiring a Cypriot passport with the acquisition of properties in Cyprus is also boosting demand, the sources said.

Bank of Cyprus already sold three hotel units and is currently advertising the sale of three more, they added, noting that the bank already received 120 related inquiries from prospective buyers while “a considerable number” has received feedback.