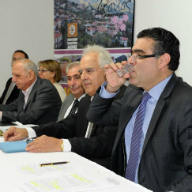 Boost of €4.2m for wine industry

The Agriculture Ministry plans to disburse up to €4.2 million in European Union funds towards development and promotion of the domestic wine industry over the next two years, with zivania playing a leading role, Minister Nicos Kouyialis said recently.

Kouyialis said a national programme to support the wine industry focused on developing investment incentives for the modernisation of the sector, including the creation of visitor facilities at vineyards and wineries.

He was speaking at a news conference ahead of a ‘zivania festival’ in the villages of Alona and Pelendri on November 9 and 16.

Zivania, a potent spirit distilled from grapes, has re-emerged in popularity in recent years. Its production was strictly regulated under British colonial rule.

“I think Cypriot wines and zivania are showing a recovery, they are gaining in prestige. Consumers and foreign visitors rank them as products of character,” Kouyialis told a news conference.

He said that Cypriot consumers should show a preference for home products. “Cypriot wines have the quality and the reputation to penetrate European markets but we ourselves have to believe that first,” he said.

Of €4.2 million which will be allocated in 2014 and 2015, he said, €2.5 million would go towards modernising mountain wineries with more commercial varieties of grapes. The remaining €1.7 million would be spent on promoting wines domestically and in other markets.