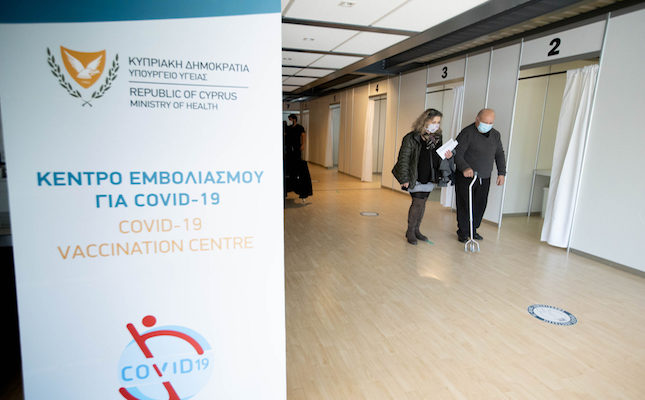 Booster shots for over 83s

The Health Ministry announced on Thursday that COVID-19 booster shots will be available for people in Cyprus over the age of 83 as of Monday.

Those above 83 will be administered a third dose of a COVID vaccine at walk-in centres, pending the tweaking of the vaccination portal to allow people to book their appointment online as of the beginning of October.

Only the mRNA vaccines Pfizer and Moderna will be used for the booster jab, irrespective of the type administered initially.

So far, those over 86 were also called to get their booster shots.

The roll-out of booster shots for priority groups such as health professionals and the immunocompromised has already began, with vaccinations at nursing homes almost complete.

The health ministry said only mRNA vaccines Pfizer and Moderna would be used for the booster jab, irrespective of the type and brand administered initially.

The authorities advised people to visit walk-in vaccination centres throughout the day to avoid congestion and long waits.

As is the procedure at all walk-in centres, people will need to carry a certificate of identification, such as an identity card, passport, or alien registration card.

Vaccinated up to March 31

People eligible for the third dose of a COVID-19 vaccine must have completed their vaccination by March 31, 2021.

Health authorities will be moving on to younger age groups “according to interest and vaccine availability”.

The decision to vaccinate people over 65 and vulnerable groups follows studies that have shown immunity levels of the elderly can start to wane five months after their second shot.

And the European Medicines Agency said additional doses should already be considered for people with severely weakened immune systems as part of their primary vaccination.

According to the most recent data, 80.6% of the island’s adult population has received at least one doseof the vaccine and 77.1% are fully vaccinated.