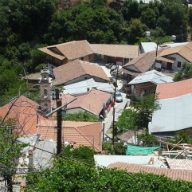 Moves to connect rural areas with the internet over the next three months and develop a wireless access network through hotspots across Cyprus, are being promoted in Cyprus with EU funding.

The aim is to provide access to the one third of the population currently not using the internet. Nicos Argyris, acting assistant at Cyprus' Digital Champion, part of the communications and works ministry’s department of electronic communications, told the Cyprus News Agency that the EU was promoting the creation of broadband service networks across Europe and it was expected that over the next couple of years Cyprus would be obliged to set up such networks. Argyris, who is currently stationed at the commerce ministry said Cyprus was already working on the issue so that “we can be pioneers, a model that could be used by the rest of Europe.”

Argyris said the 30% or so of the population who did not use the internet were in rural areas. “We will help them understand the necessity of the internet,” he said, adding that ‘digital ambassadors’ would be trained for this purpose. The move would help towards improving financial activity in rural areas, and provide the residents with access to government departments online from the comfort of their homes. Argyris also said WiFi was important for agrotourism.

He said a proposal was submitted recently to the House for the provision of wireless access points at selected places, such as highly frequented archaeological sites, monuments, and monasteries. But there would be certain restrictions, such as blocking the downloading of files that use a large bandwidth. Argyris also said statistical data would be collected in order to measure the success of the project and plan the next steps. So far however only 122 communities have expressed an interest, while 148 others are still mulling it over.

“In our contact with the communities and taking into consideration the fact that the whole project will be funded by the EU, I believe that soon the remaining 230 communities will respond and request the installation of this kind of service,” he said. “We have provided for the funding of the whole project.” Argyris said it would probably not take more than three months to connect the rural areas.

He said the system could be upgraded to run on higher speeds, noting that if an existing line provided 4 mbps at a running cost of €35, it could be upgraded to 8 or 12 mbps at a running cost of €50. Argyris said installation across Cyprus would cost about €500,000, would be funded by the EU. ‘Digital ambassadors’ will be trained to deal with any glitches and help people in communities learn how to use the internet.

Argyris said the system would complement existing internet connections and could even increase demand. “Our aim is not to replace existing connections. The system has been designed in such a way so as to complement the provision of services from existing networks,” he said. This means a user would not be able to have access to the breadth of services offered by an independent provider, such as live football matches or certain downloads. In this way, he said, people who become computer literate and use the internet may opt to buy a package of services from providers, who have not increased their sales in rural areas for two years.